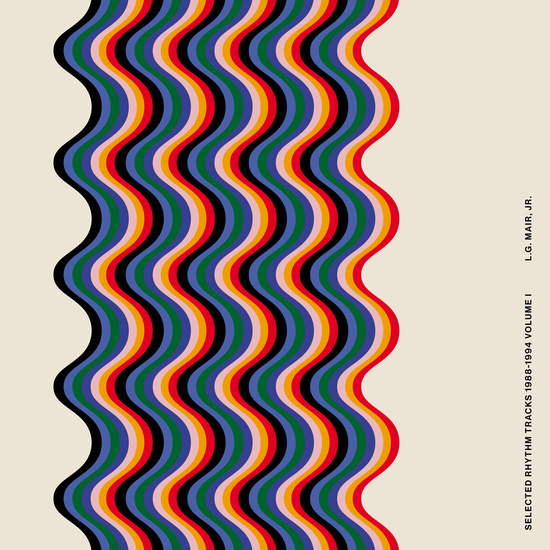 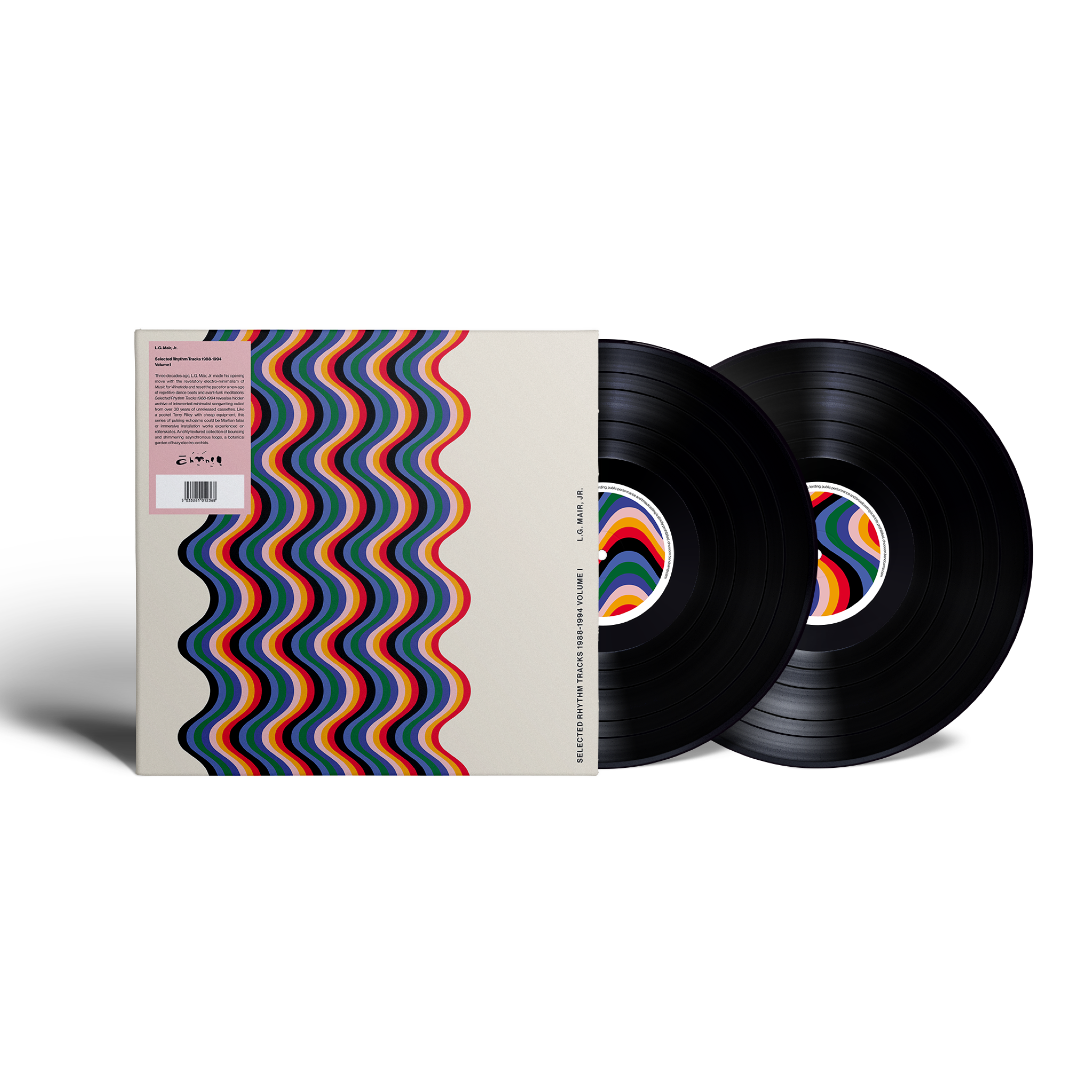 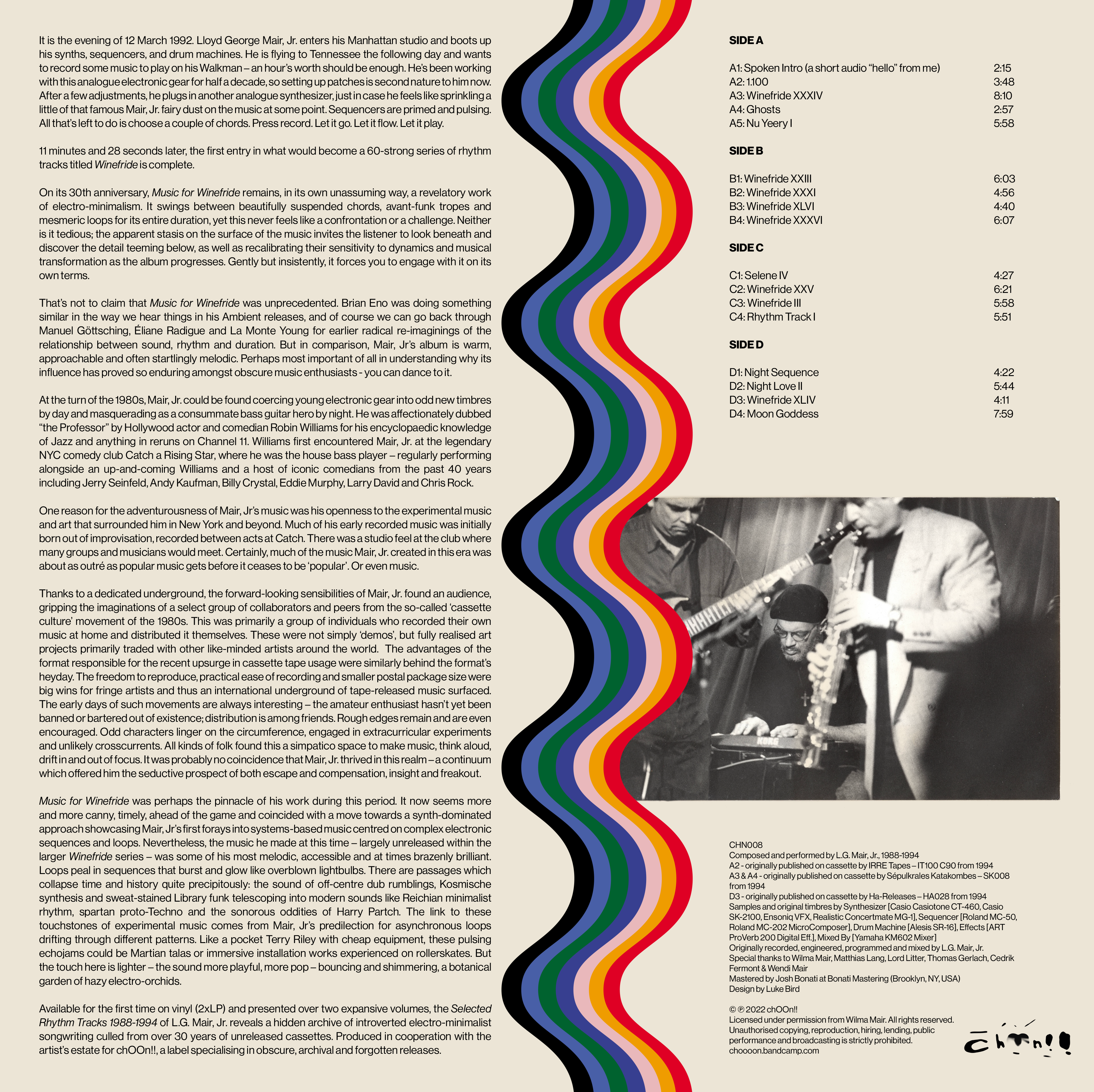 At the turn of the 1980s, L.G. Mair, Jr. was coercing young electronic gear into odd new timbres by day and masquerading as a consummate bass guitar hero by night – a regular fixture at the legendary NYC comedy club Catch a Rising Star, where he was the house bass player – regularly performing alongside a host of iconic comedians from the past 40 years inc. Robin Williams, Andy Kaufman and Chris Rock.

His early music was born out of improvisation, often recorded between acts at Catch and he soon began issuing a dizzying array of home-baked cassettes. In the 1980s, cassettes were the ultimate guerrilla media, from home-dubbed compilations to private releases in editions of 100 copies, tapes offered a chance to redraw established evolutionary accounts. It was probably no coincidence that Mair, Jr. thrived in this realm – a continuum which offered him the seductive prospect of both escape and compensation, insight and freakout.

In 1992, Mair, Jr. released ‘Music for Winefride’, which on its 30th anniversary remains, in its own unassuming way, a revelatory work of electro-minimalism. It swings between beautifully suspended chords, avant-funk tropes and mesmeric loops for its entire duration, yet this never feels like a confrontation or a challenge. Neither is it tedious; the apparent stasis on the surface of the music invites the listener to look beneath and discover the detail teeming below. The album is warm, approachable and often startlingly melodic. Perhaps most important of all in understanding why its influence has proved so enduring amongst obscure music enthusiasts – you can dance to it.

Mair, Jr. recorded hundreds of cassettes during this period, most of which remained unreleased or traded with like-minded artists around the world. Nevertheless, the music he made at this time was some of his most melodic, accessible and at times brazenly brilliant. The sound of off-centre dub rumblings, Kosmische synthesis and sweat-stained Library funk telescoping into modern sounds like Reichian minimalist rhythm and spartan proto-Techno – a dizzying and unexpected cosmic tapestry.

Available for the first time on vinyl and presented over two expansive volumes, the ‘Selected Rhythm Tracks 1988-1994’ of L.G. Mair, Jr. reveals a hidden archive of pulsing echojams, avant-funk meditations and introverted electro-minimalist songwriting culled from over 30 years of unreleased cassettes. Produced in cooperation with the artist’s estate for chOOn!!, a label specializing in obscure, archival and forgotten releases.