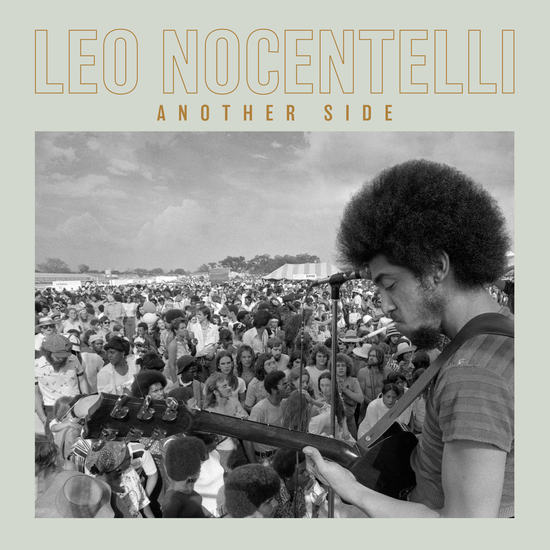 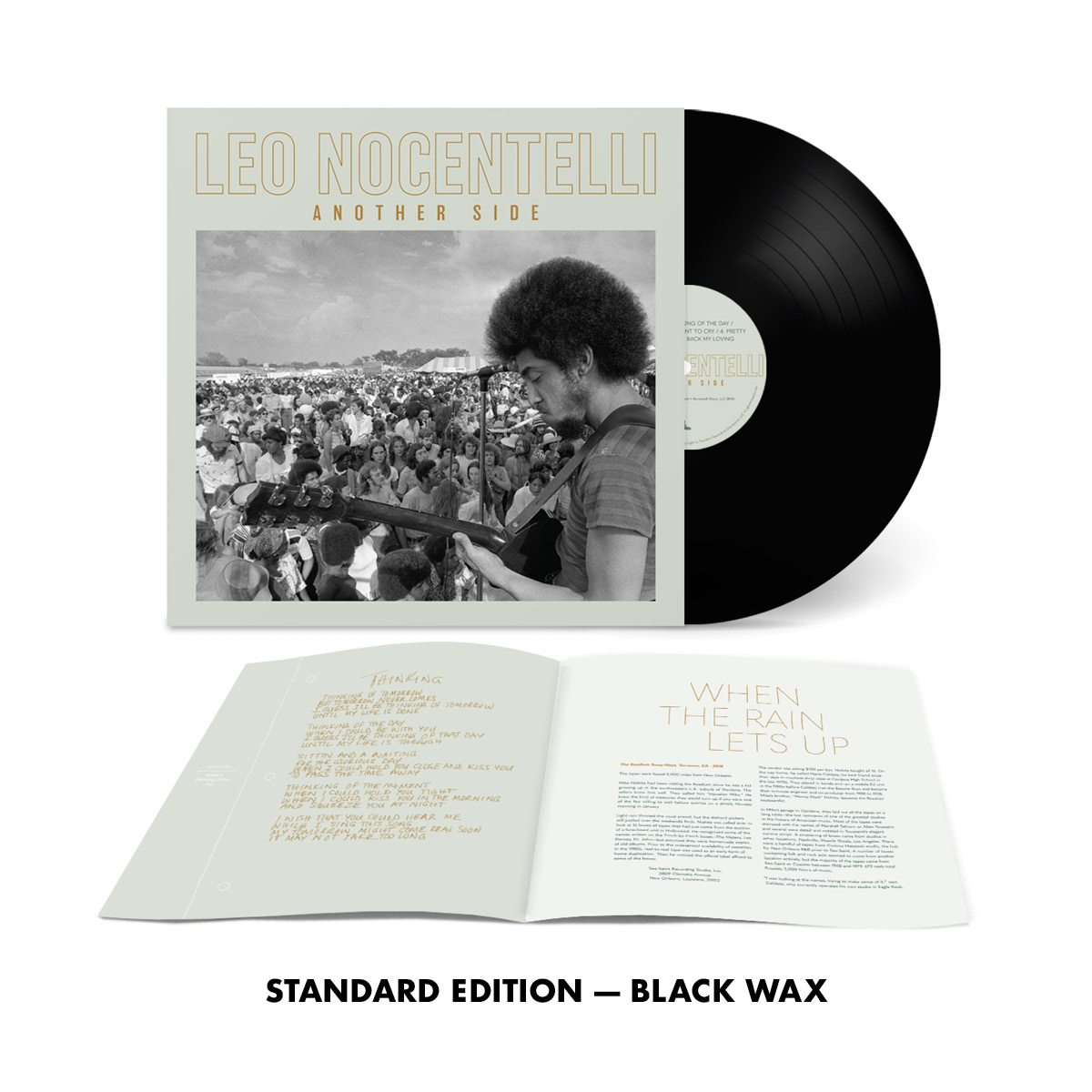 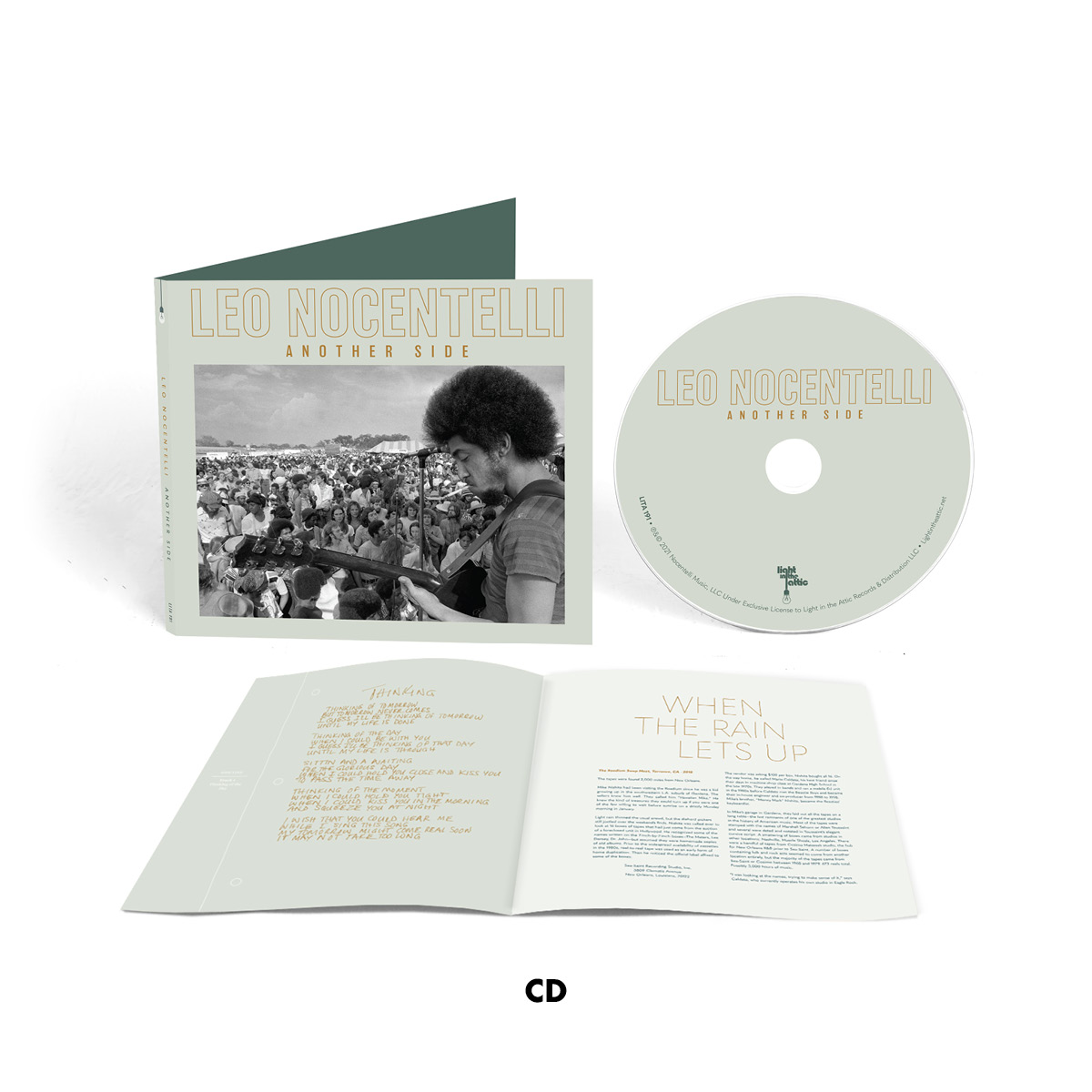 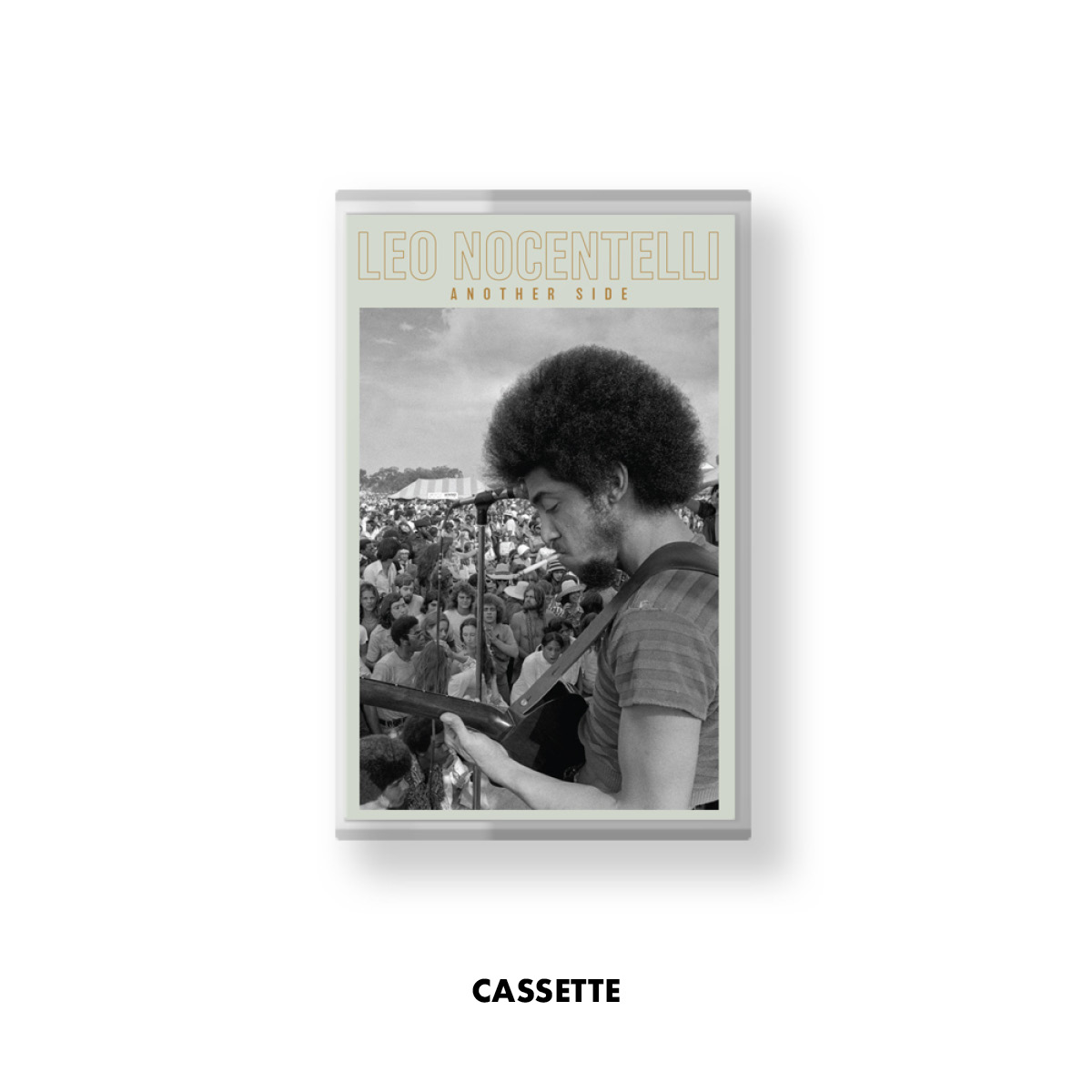 At just sixteen, Leo Nocentelli was backing up Otis Redding. Soon after, he was playing on hits for Lee Dorsey, The Supremes, and The Temptations. As an original member of The Meters, Leo wrote instant classics “Cissy Strut” and “Hey Pocky A–Way,” but his greatest moment on record may be totally unknown, until now…

Recorded at Cosimo Matassa’s Jazz City Studio in New Orleans in the early ‘70s and then lost to the ages, Another Side is one of Leo Nocentelli’s most personal and definitive moments ever cut to tape. A mixture of funky folk and rootsy, raw emotion (think Bill Withers and James Taylor meeting Allen Toussaint at Link Wray’s Three Track Shack), this previously unheard album shines like the sun on a spring day on the New Orleans fairgrounds. Backing Nocentelli is an all-star line-up of New Orleans royalty, including Allen Toussaint (piano), James Black (drums), and both George Porter Jr. (bass) and Zigaboo Modeliste (drums) of The Meters. Deeply introspective, the album features nine original songs by Nocentelli, plus a soulful rendition of Elton John’s “Your Song.” Half a century later, these recordings sound just as fresh and engaging as the day they were recorded.

What makes Another Side even more extraordinary, however, is the fact that the album—which could have easily become a classic in the ‘70s singer-songwriter canon—sat untouched for decades; miraculously surviving the devastating blow of Hurricane Katrina, only to be found 2,000 miles away at a Southern California swap meet in 2018 by record collector Mike Nishita.

The album’s incredible journey is documented in the liner notes by Sam Sweet (New York Times, Los Angeles Times), who spoke with Nocentelli and Nishita about the recording process and re-discovery of the tapes. Sweet’s full notes appear in the release’s accompanying booklet alongside hand-written lyrics by Leo Nocentelli. Rounding out the package are original designs and layout by the multi GRAMMY®–winning designer Masaki Koike.

While Nocentelli was embedded in New Orleans’ R&B scene, he was also deeply inspired by the late 1960’s and early 1970’s rising singer-songwriters, and soon found himself exploring sounds that were miles away from his band’s hard-edged funk riffs. Whenever he had downtime from session work and shows, Nocentelli spent much of 1971 recording his newly-found, reflective, diaristic songs at Matassa’s Jazz City studio. Backed by longtime Meters bandmate George Porter Jr. on bass, Nocentelli crafted the lineups for his sessions to match the tone of the material. When he needed a pianist, he’d call Toussaint. For percussion on the slower songs, he used drummer Zigaboo Modeliste, but many of the tracks featured James Black—a frequent collaborator of Toussaint’s and a member of Ellis Marsalis’ jazz group, whom Nocentelli recalls as an “unbelievable” musician.

The recording, which Nocentelli fondly refers to as his “country-and-western-album,” paints a picture of a young man yearning to find a sense of purpose. “I was going through some changes which were reflected in the songs that I wrote during that time,” he tells Sweet. Among them is the mid-tempo “Getting Nowhere,” in which he expresses a sense of frustration, as he watches others find success around him. Similarly, “Till I Get There” details a man who is struggling to persevere in his goals. In the soaring “Tell Me Why,” meanwhile, the singer contemplates the existence of God.

Other songs center around fictional characters. “Pretty Mittie,” for instance, is sung from the perspective of a farmer who longs to give up his arduous life for the city. “You’ve Become a Habit” is about a man who falls for a sex worker named Fancy. “Riverfront” is based on stories that singer Aaron Neville shared, about his days working on the New Orleans waterfront. Nocentelli also chose to perform one cover: Elton John’s breakthrough hit, “Your Song.” The guitarist made the recently-released ballad his own—infusing it with a loping, head-nodding cadence, ever so tastefully “funkdafied” in true New Orleans fashion.

By the time that the album was finished, The Meters were busier than ever. They had just signed a record deal with Warner Brothers and were now the official house band at Toussaint’s studio, Sea-Saint. There, they not only backed artists on Toussaint’s Sehorn label but had also become the go-to session musicians for every major artist that recorded in New Orleans. Rather than focus on a solo career, Nocentelli poured his energies into The Meters’ next album. Eventually, time moved on, as did Nocentelli, and he decided to store his unreleased solo album at Sea-Saint for safekeeping.

In 2005, when Hurricane Katrina devastated New Orleans, Sea-Saint was among its victims. While Toussaint (who passed away in 2015) had sold the hallowed studio in the mid-90s, hundreds of his archived recordings remained in the building. The new owner salvaged what he could from the flooded building, shipping everything to a storage facility in Southern California. Boxes of tapes sat there for more than a decade before moving to another unit, which foreclosed a year later. The contents were purchased in a blind auction and, days later, sold at a swap meet. The fact that record collector Mike Nishita just happened to be there was pure kismet.

Nishita, a DJ and brother to “Money Mark” Nishita (of Beastie Boys fame), recognized the Sea-Saint label on the boxes and purchased all 673 master tapes at the swap meet. He inspected the contents with his friend Mario Caldato Jr., the longtime audio engineer for the Beastie Boys. In addition to masters from Irma Thomas, Dr. John, Lee Dorsey, and Toussaint, there was a quarter-inch reel with Nocentelli’s name on it. As Caldato and Nishita played it back, they knew they had something special.

“There was nothing else like it,” writes Sweet. “An acoustic album by the greatest funk guitarist who ever lived. It was the tape Mike would play for people to show them how special the collection was. The best album in the vault was something nobody knew existed.”

Eventually, Nishita and Nocentelli connected, “He was so grateful, so sincere,” recalls Nishita. “I just kept thinking about how this music needs to be heard…Especially when you look at all the things that had to fall into place for these tapes to survive and be discovered this way.” As Nocentelli simply puts it, “Things happen for a reason, man.”

And now, Light in the Attic is thrilled to give this remarkable record the spotlight it so rightly deserves. 50 years later, all is not lost. 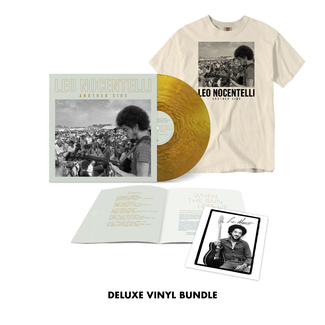 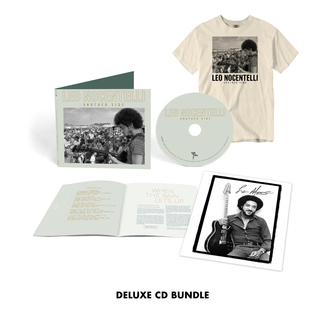 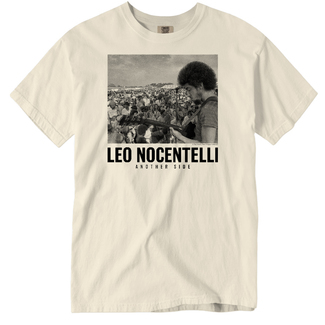 Leo Nocentelli
Another Side T-Shirt