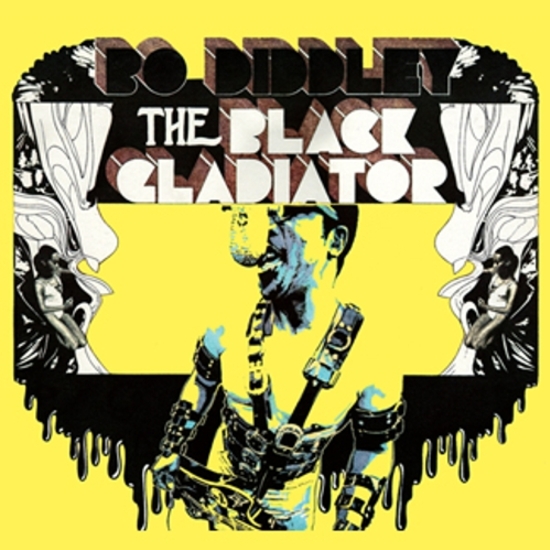 As a key player in bridging the gap between blues and rock and roll, Bo Diddley released his debut single in 1955 on Chess Records’ Checker subsidiary, the self-mythologizing “Bo Diddley” (b/w “I’m A Man”). The tune was an instant smash on the R&B charts and eventually covered by no less than Buddy Holly, Bob Seger, and The Grateful Dead. Countless hits followed, but by the mid-60s, a new breed of rock and roll rebels from the UK and US had taken over the charts, artists ironically raised on the blues/R&B/rock and roll sounds of Diddley and his pioneering peers of the 1950s.

While the sixties came to a close, Diddley may have been working at a less prolific pace than during his earlier heyday, but the man was certainly charged up and ready to drop a full-blown musical bomb. In an attempt to fit in with the current youth oriented scene (Sly and the Family Stone, Rare Earth, The Rolling Stones) and recent acid rock audience targeted albums by label mates Muddy Waters (Electric Mud_) and Howlin’ Wolf (_The Howlin’ Wolf Album), Bo would further push the boundaries with the release of The Black Gladiator. The album would modernize his blues-rock sound with a rugged funk edge, while retaining the spirit and humor of his finest work, and feature an album cover of the man donning a bodacious leather belt/pseudo S&M get up that would put Isaac Hayes’ chain link vestments to shame. Across ten wild child tracks, the future rock and roll hall of fame inductee hits hard on every note. There are raw gospel shouts, ripping guitar, fatback drums, gritty Hammond organ, and even a round of the dozens with Cookie Vee (Cornelia Redmond).

Originally lost amidst a new decade and changing soundscapes, The Black Gladiator never really registered upon its release in June 1970. Still, its tough grooves and bold, black, and beautiful sleeve design has been a soulful secret in many a record collection. Replete with extensive liner notes by Scott Schinder and re-mastering from the original tapes by engineer Dave Cooley (Elysian Masters), the re-release makes The Black Gladiator finally ready for battle again.