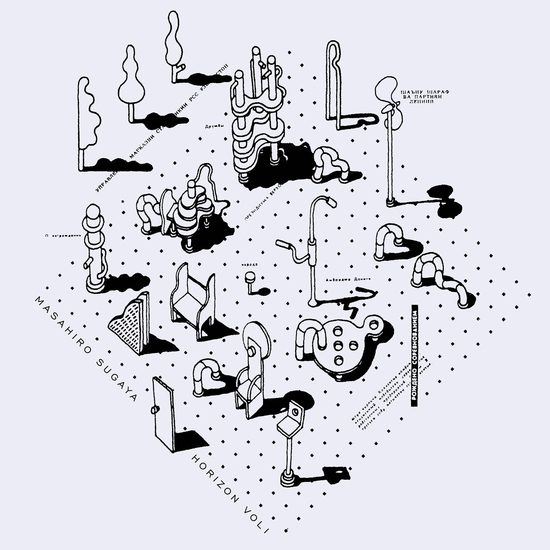 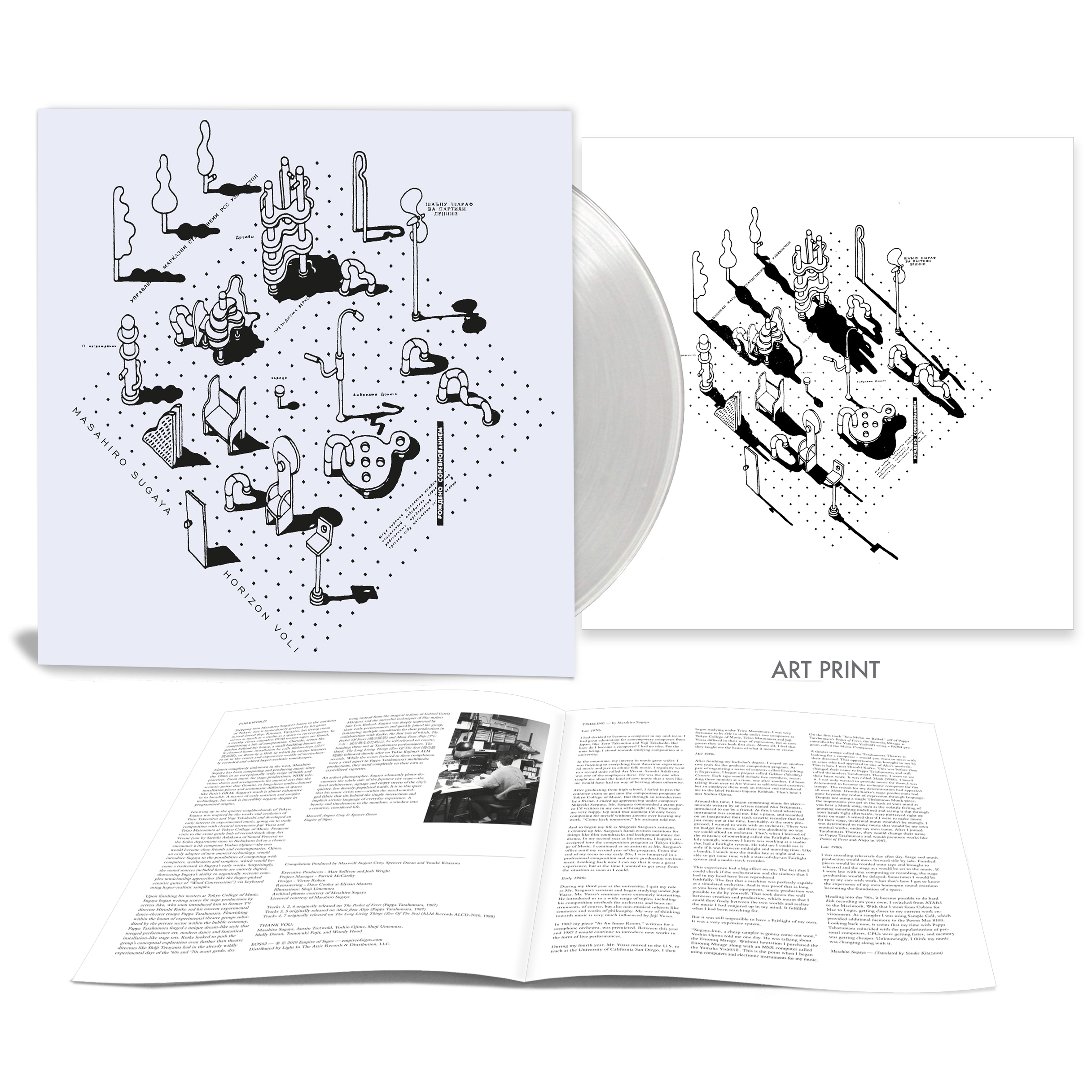 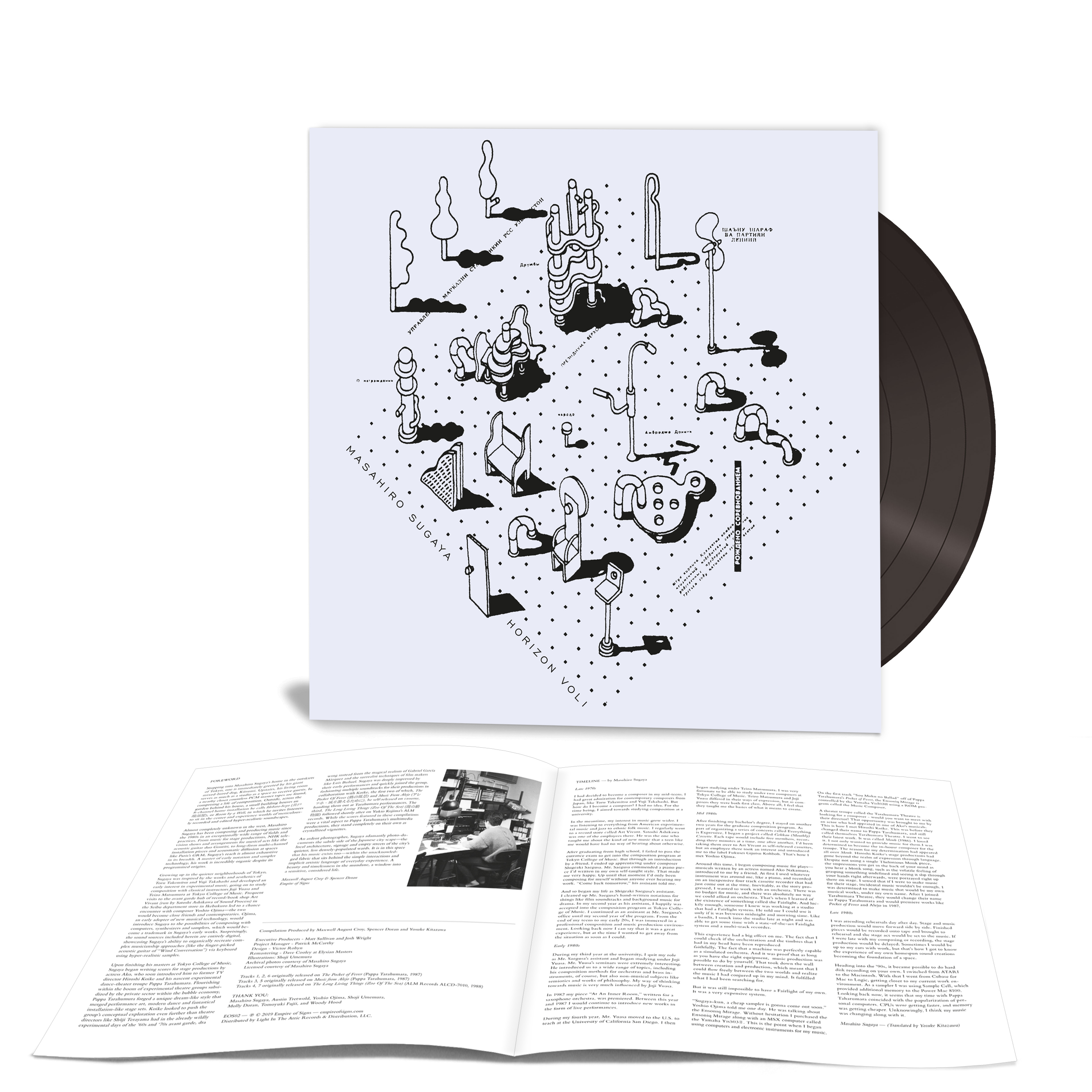 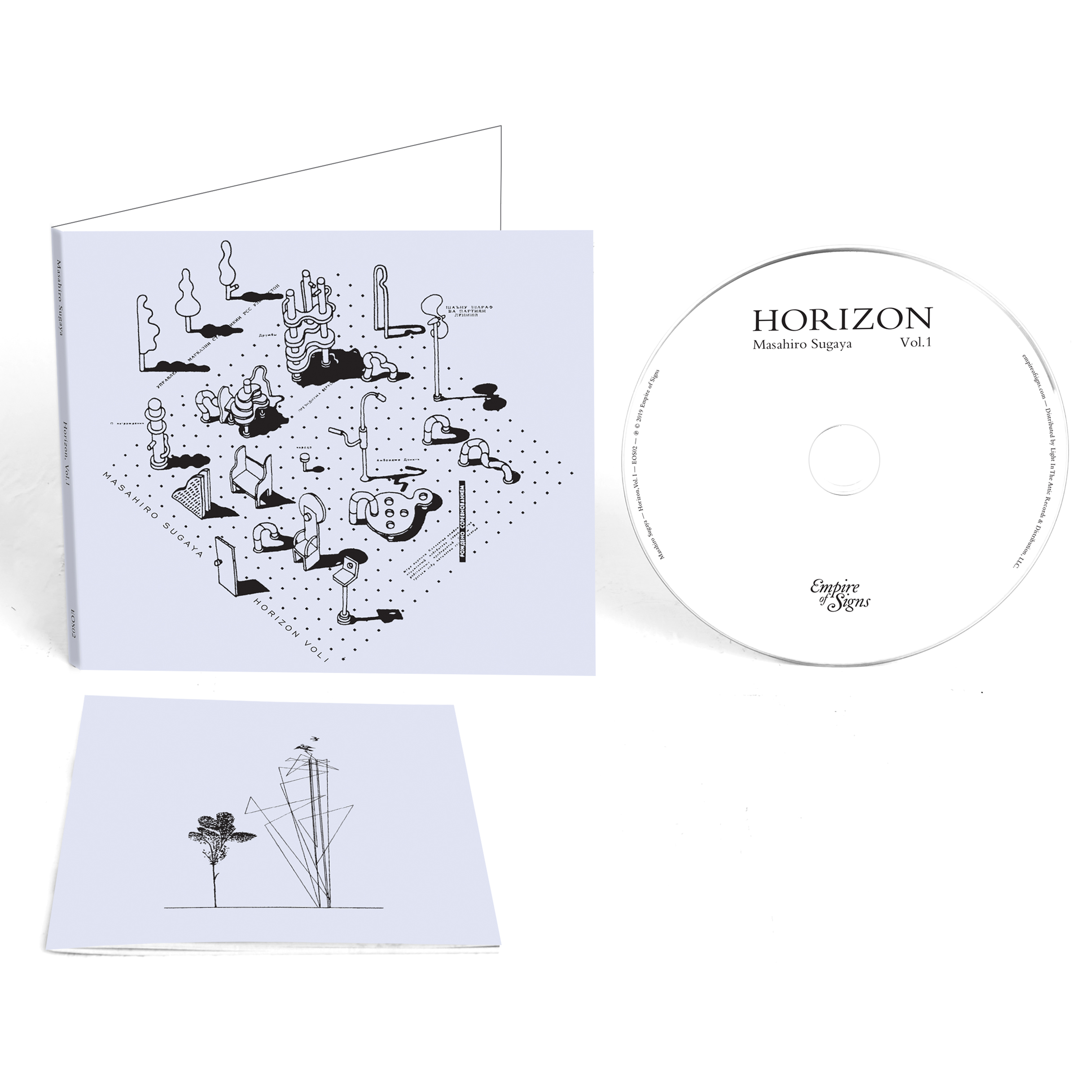 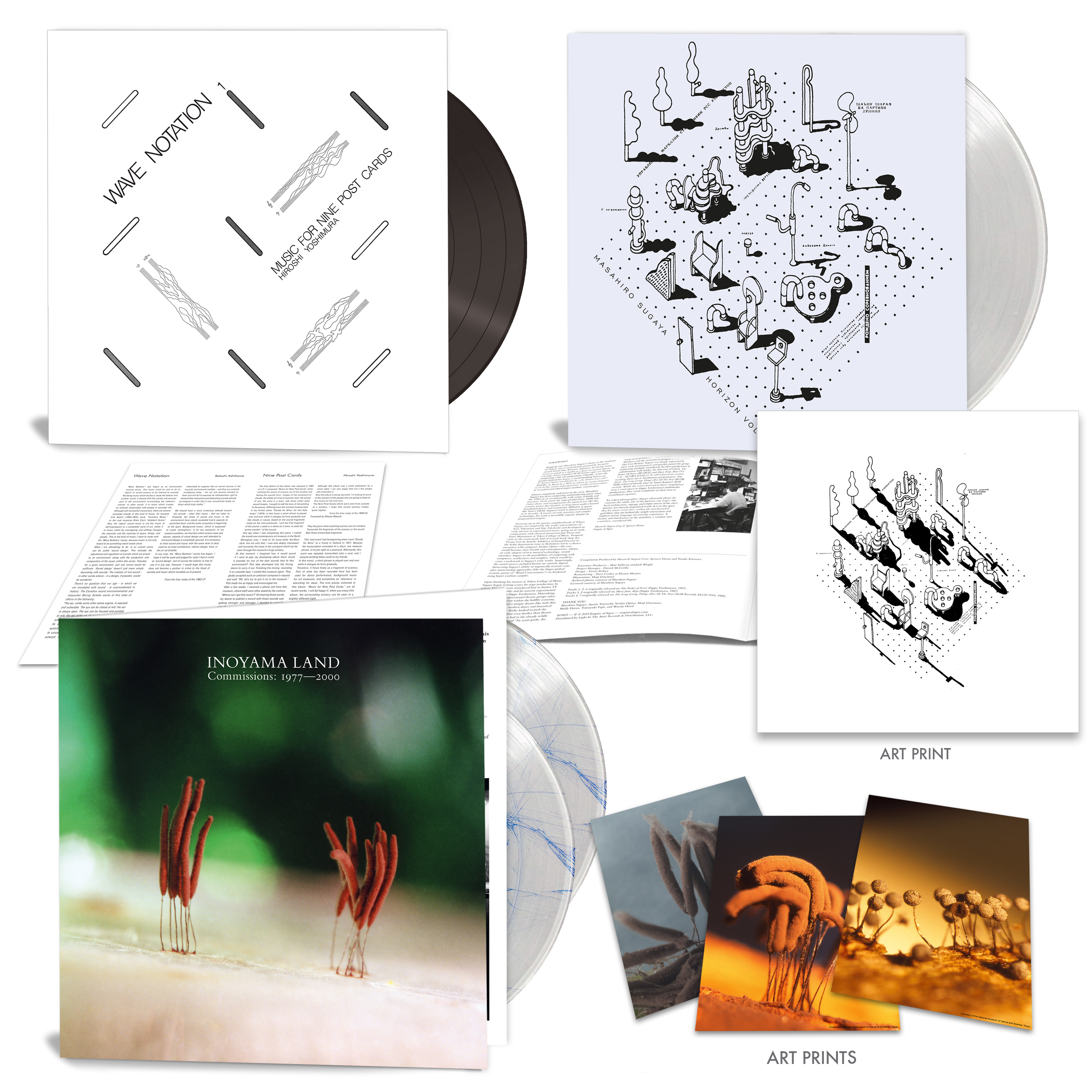 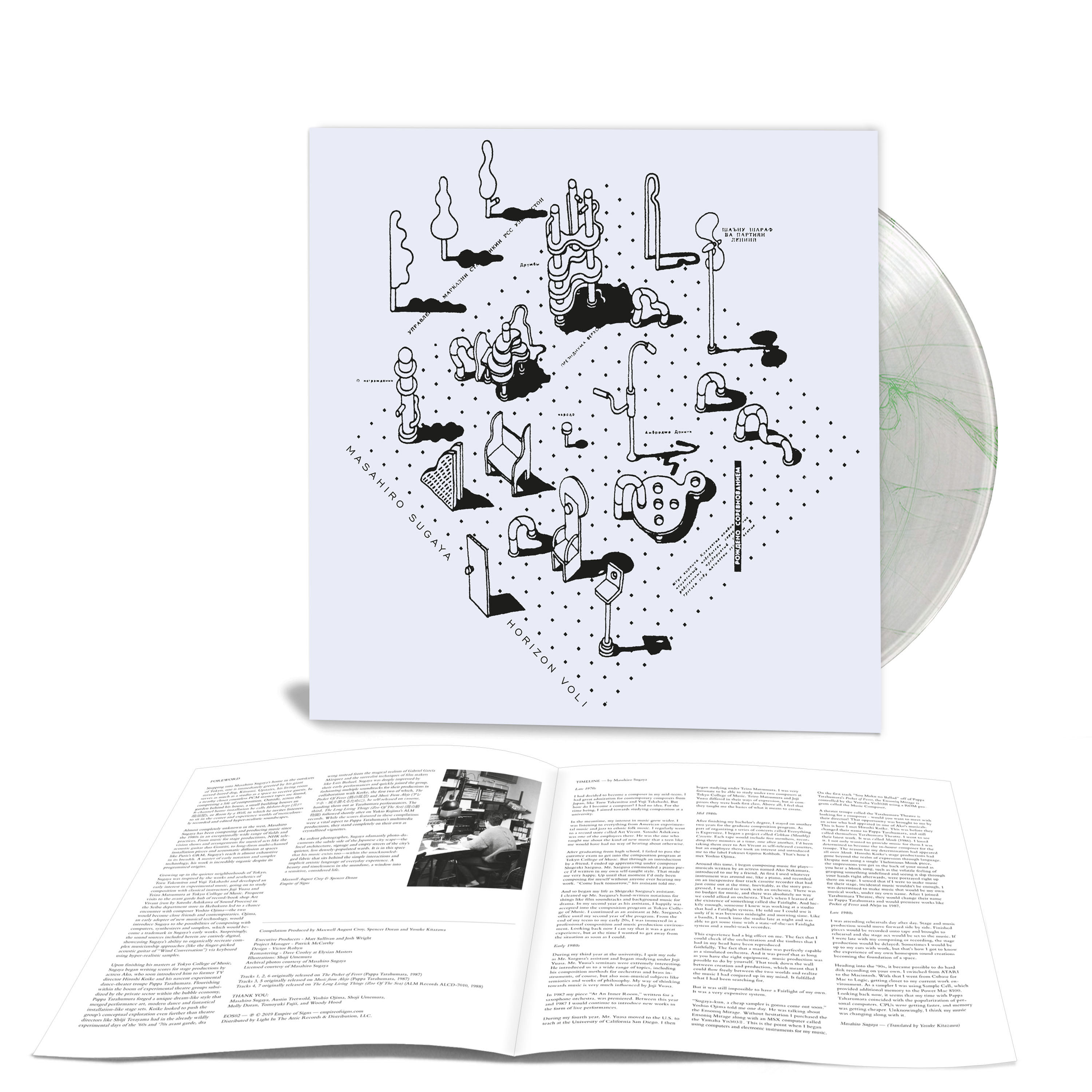 Almost completely unknown in the west, Masahiro Sugaya has been composing and producing music since the 1980s in an exceptionally wide range of fields and practices. From arrangements for musical acts like the acoustic guitar duo Gontiti to acousmatic diffusion at spaces like Paris’s Groupe de Recherches Musicales (GRM), Sugaya’s reach is almost exhaustive in its breadth, but it was in the 80s bubble-era kankyō ongaku scene that he first found his musical voice. Horizon, Volume 1 presents a window into these works, culled from Sugaya’s early scores for experimental Tokyo theatre group Pappa Tarahumura.

As a teenager, Sugaya would visit the avant garde hub of record/book shop Art Vivant run by Satoshi Ashikawa of Sound Process, guided by Ashikawa’s recommendations into the worlds of experimental composition, jazz and ethnographic music. It was there he also met musician Yoshio Ojima—the two would become close friends and contemporaries, working within a circle of Tokyo musicians that also included Midori Takada, Hiroshi Yoshimura and Satsuki Shibano. Ojima, an early adopter of new musical technology, would introduce Sugaya to the possibilities of composing with computers, synthesizers and samplers, which would become a trademark in Sugaya’s early works. Surprisingly, the sound sources on Horizon are entirely digital, showcasing Sugaya’s ability to organically recreate complex musicianship approaches via keyboard using hyper-realistic samples. Much like Ojima and Yoshimura’s work, the results eschew electronic music’s usual coldness for something more warm and inviting, the feeling of a human in deep conversation with technology.

Flourishing within the boom of experimental theatre subsidized by corporations during the bubble economy, Pappa Tarahumura forged a unique dream-like style that merged performance art, modern dance and fantastical installation-like stage sets. Sugaya fashioned multiple soundtracks for their productions in collaboration with director Hiroshi Koike, the first two of which, The Pocket Of Fever_ (熱の風景) and Music From Alejo_ (アレッホ – 風を讃えるために), he self-released in 1987 on cassette, handing them out at Tarahumara performances. The third, The Long Living Things (Zoo Of The Sea) (海の動物園) followed in 1988 as a CD on Yukio Kojima’s ALM records. Aside from his brief inclusion on Light in the Attic’s Kankyō Ongaku: Japanese Ambient, Environmental & New Age Music 1980-1990 (compiled by Empire of Signs’ Spencer Doran), Horizon presents this work outside of Japan for the first time.