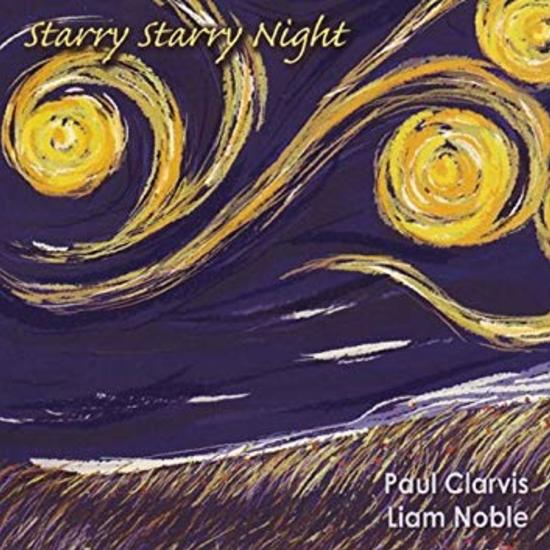 A charming little beauty, Starry Starry Night is a collection of cover versions of mainly familiar material by drummer Paul Clarvis and pianist Liam Noble, two characterful lights of the British jazz scene. The tunes range from classic standards like Duke Ellington’s “Mood Indigo,” the Gershwins’ “Embraceable You” and Scott Joplin’s “Maple Leaf Rag,” through to more recent treasures like Gillian Welch’s “Dear Someone,” Don Maclean’s “Vincent (Starry Starry Night)” and Moondog’s “Paris.” The album is as intimate and seductive as the source material and instrumentation promise—Clarvis and Noble are respectful of the composers’ original intentions, rarely straying far from the top-lines or basic changes—but the duo bring fresh fascination to even the most well-worn item.

Clarvis and Noble met, propitiously, when they both worked in the band put together to accompany composer and multi-instrumentalist Moondog at a London concert in the 1990s. They’ve since performed and recorded together frequently, and followed singular paths of their own. Clarvis leads the quirky world jazz and folk band Orquestra Mahatma, and has become an in-demand session drummer whose soundtrack credits include numerous big screen blockbusters (among them Star Wars, Lord Of The Rings, Batman, Billy Elliot and Shakespeare In Love). A master technician who wears his virtuosity lightly, Clarvis is an unusually melodic drummer. Among his several involvements, Noble, who is equally at home in the lyric songbook tradition and the most uncharted free-improv, performs and records with folkish jazz singer/songwriter Christine Tobin and with saxophonist Ingrid Laubrock. With Laubrock he recorded the mainly jazz standards duo album, Let’s Call This (Babel, 2006), and the deep and singular Sleepthief (Intakt, 2008). His playing on Starry Starry Night is rhapsodic and vivacious.

Given the nature of the material, it might be expected that much of the interest on the album would derive from Noble’s performances. But Clarvis, heard throughout on brushes, holds his own. He transposes the melody and rhythmic emphases of “Embraceable You” to the drum kit to create one of the highlights of the album. Others are Welch’s “Dear Someone,” an exquisite “last waltz” with a suggestion of menace in the wings; Ellington’s “Mood Indigo,” which Noble succeeds in making both spectral and lush; and Moondog’s infectiously joyous "Paris.