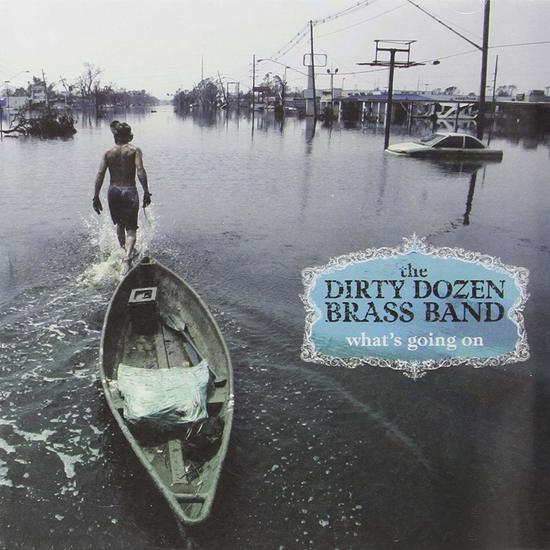 In 2006, exactly a year after Katrina, in the aftermath of a vicious natural disaster that displayed the incompetence of the Crescent City’s infrastructure, the Army Corps of Engineers, and the Federal Government, they addressed the tragedy in the only way they know how, by re-creating the same kind of bewilderment and anger that Marvin Gaye felt and witnessed in 1971 by issuing their own take on Gaye’s classic album What’s Goin’ On. This is a question that is proved all the more poignant given the efforts of an entire region trying not only to rebuild homes and businesses, but trying to preserve a culture as this recording was released.

The Dirty Dozen recruit a number of vocalists to help out on the hinge tunes. The samples of New Orleans Mayor Ray Nagin’s voice in the aftermath of the hurricane usher in the brass slip-sliding along the dark funky overtones of Gaye’s signature tune. Guitarists Doug Bossi and Ben Keeler dig into the groove, as does drummer Terence Higgins and keyboardist/producer Anthony Marinelli, as Chuck D raps the refrain in the context of modern history, the disaster, and the ineptitude and even hostility of a government who wages war and ignores domestic problems. It’s a news report from the front lines as the horns cut the melody, the harmony, and the deep, steamy funk groove. “What’s Happening Brother,” closes the funk from the inside, turning the groove back in on itself not only playing the rage, but echoing it in the grain of Bettye LaVette’s vocal, which dares to spit out the truth with questions and observations in the pain of a first person narrative.

What’s Goin’ On is the most fitting tribute yet to Gaye, because not only does it prove the timelessness of the music itself, it echoes that what is indeed goin’ on (Gaye’s dedication to Detroit as its decline became a reality with no onlookers interested in doing anything) is even more true today than it was in 1971. by Thom Jurek /AMG