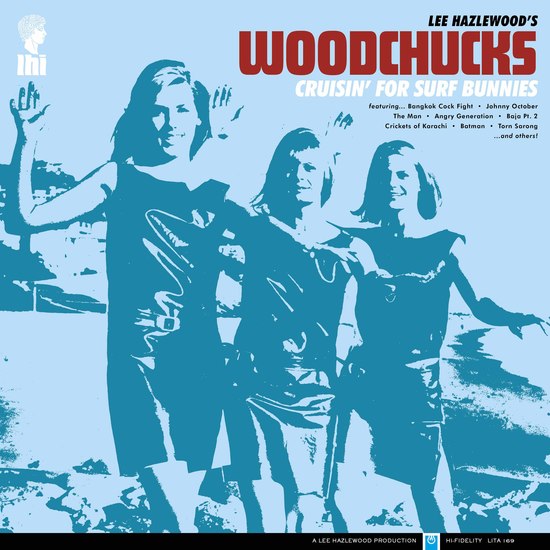 Deep in the LHI tape archive hid a mysterious tape marked “Woodchucks.” The tape held a "lost” instrumental surf album recorded by Lee Hazlewood in the early 1960s. Some of the songs have been recorded by The Astronauts, Jack Nitzsche, Dick Dale and His Del-Tones, Takeshi Terauchi, The Ventures, John Paul Jones (Led Zeppelin), The Trashmen, The Challengers and The Surfaris. Lee’s original recordings have never been released. Bask in the reverb drenched twang of Lee Hazlewood’s original versions for the first time ever!

Light in the Attic Records is proud to continue it’s Lee Hazlewood archive series with this very special release. Not a reissue, but rather a brand new, never before released time capsule from the surf era. Lee Hazlewood’s Woodchucks Crusin’ for Surf Bunnies is the perfect soundtrack for sun-baked skin and salty waves, hot rods and summer love. It’s the soundtrack to the American dream in the early 1960s and it comes from California. Though Lee and Suzi Jane Hokom hadn’t met yet, they were both living that dream…Suzi with her group The Surf Bunnies and Lee on his brief surf music tangent with albums like Al Casey’s Surfin’ Hootenanny, Hal Blaine and the Young Cougars and The Glaciers From Sea to Ski.

“He was trying to do too much at that period of time. He was just throwing stuff around, but this sounds like a complete project. If there was an airplay record in there, he probably could’ve had a band go out and be the Woodchucks or whatever he wanted to call them. It’s a good surf album. I really loved it. He was a master…there’s no question about it. He invented sounds that no one was doing.” – Shackleford and “Lonely Surfer,” Marty Cooper