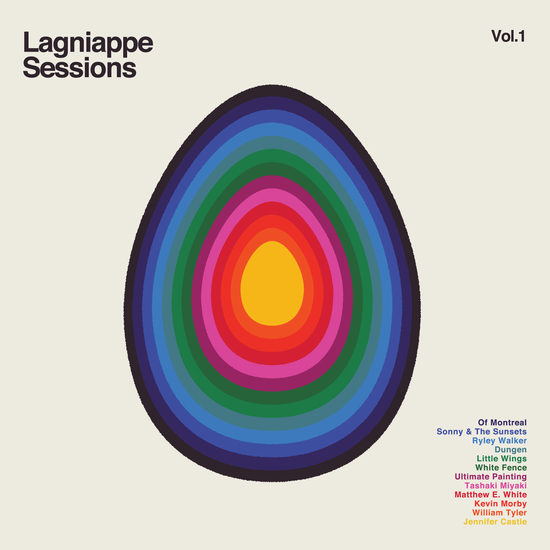 Founded in Los Angeles, CA by Georgia transplant Justin Gage, the Aquarium Drunkard blog has long served as a haven for discerning and adventurous listeners since 2005. Digging globally, AD offers an eclectic array of features, interviews, mixtapes, and reviews spanning vintage garage, psych, folk, country, soul, funk, R&B and beyond. The scope is wide, but the motto is simple: Only the good shit. Pardon the blue language, but it tracks. Release dates and hype aren’t driving forces at AD; the material featured on the site is there because Gage and the staff dig what they’re writing about.

In 2011, Gage launched the Lagniappe Sessions, a regular recording series on the website and the weekly Aquarium Drunkard Show on Sirius/XMU featuring freeform selections, songs culled from artist’s record collections and inspirations. This co-release between Light In The Attic Records and Aquarium Drunkard Recordings documents the first five years of the series, collecting on vinyl for the first time a diverse lineup of obscure gems and familiar tunes refashioned into surprising and unexpected things. Psychedelic Swedes Dungen cover electronic pioneer Aphex Twin; of Montreal tap into the classic folk ballad “All My Sorrows”; troubadour Kevin Morby configures the blistering hardcore of the Germs into something more mystical. Some of the most familiar songs on Vol. 1 are the farthest out in terms of reinterpretation — White Fence reimagines the Gin Blossoms as a Paisley Underground outfit; guitarist William Tyler draws lines connecting the ragas of Sandy Bull to the progressive rock of Blue Oyster Cult.

“Songs like this play on long after the record is done and become more like truths to me,” songwriter Jennifer Castle wrote for AD regarding her cover of Bob Dylan’s “Walkin’ Down the Line”. The songs of Lagniappe Sessions Vol. 1 share that quality equally.