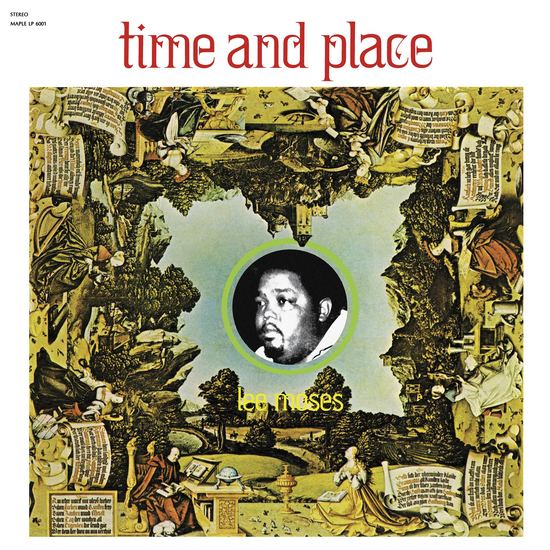 Lee Moses was a huge talent and if he’d had the big hit album he richly deserved, Time And Place would’ve been it. A self-taught multi-instrumentalist, Moses cut his teeth in the clubs of Atlanta, the ‘Motown of the South’, where he frequently performed alongside his contemporary Gladys Knight (who reportedly wanted him for the Pips, but couldn’t pin him down).

It was, however, in New York in the ‘60s that Moses made his greatest bid to find the solo fame he desired. Moses began working there as a session player, even playing frequently with a pre-fame Jimi Hendrix, but his close relationship with producer and Atlanta native Johnny Brantley eventually saw him getting his own break via a series of 45s in 1967 – most notably with covers of Joe Simon’s “My Adorable One”, The Four Tops’ “Reach Out, I’ll Be There” and The Beatles’ “Day Tripper”.

It was 1971 before Moses’ dream of being at stage front was realized, when he released his Brantley-produced LP Time And Place for Maple Records. Recorded with a band including members of The Ohio Players and Moses’ own backing group The Deciples, it was, nonetheless, Moses himself whose star quality shone through, via his scratchy guitar riffs, his throat-ripping vocals and the stirring mood that permeates the LP’s heady mix of funk, soul and R&B.

The LP did no business, and Moses’ dream quickly crumbled. Though details on his life are scarce, it’s believed he fled New York disenchanted with the music industry, feeling he’d been double-crossed by Brantley both in credit and remuneration for the countless records he’d played on. Back in Atlanta, Moses returned to playing the clubs, married twice, and fell into depression and drug dependency. He died in 1997 at the age of 56.

Time And Place soon became a much-sought-after item for collectors, and its cult has continued to grow over the years. Here, we re-present it on deluxe vinyl, with brand new liner notes from Sarah Sweeney including interviews with Moses’ sister and his closest collaborator, the singer and guitarist Hermon Hitson. Through them, Moses becomes a little – but just a little – less of an enigma.