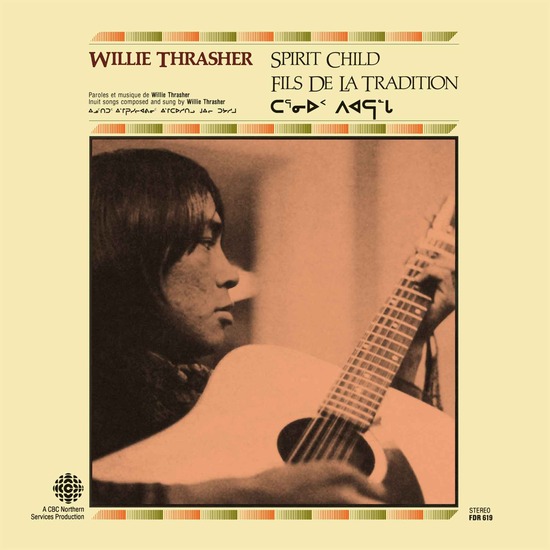 Spirit Child is the debut LP from Inuk singer-songwriter Willie Thrasher. Thrasher was born in Aklavik, a hamlet located in the Inuvik region of the Northwest Territories, Canada, in 1948. At five years of age, Thrasher was taken from his family and sent to a residential school where he was forbidden to practice his Inuvialuit culture, a shameful initiative by the Canadian government to assimilate Indigenous people into mainstream society. Music was a way for Thrasher to escape the pain and longing.

In the mid-1960s, Thrasher drummed for The Cordells, one of the first Inuit rock bands. One evening, a stranger recommended that the group tap into their Aboriginal roots instead of the charts for inspiration. This prompted Thrasher to take up the guitar and write songs about his life, people, and the environment. Despite losing a portion of his left middle finger in a work accident, Thrasher became a musical vagabond, travelling across Canada and the United States throughout the 1970s and well into the 1980s meeting many other First Nations, Métis, and Inuit musicians. Spirit Child was released by the Canadian Broadcasting Corporation (CBC) in 1981 and provided a further opportunity for Thrasher to reconnect with his Native heritage and share this love and understanding with people from other cultures. “Silent Inuit” became a northern hit for Thrasher, but with limited commercial support and little promotion outside of northern communities, the album eventually fell to the wayside.

Today, Thrasher lives in the town of Nanaimo, B.C., where he performs as a city sanctioned busker with his partner Linda Saddleback. The global attention garnered by Light In The Attic’s Native North America (Vol. 1): Aboriginal Folk, Rock, and Country 1966-1985 has led to recent performances at the Austin Psych Fest and Levitation Vancouver. Wherever he may be, Willie Thrasher is a trailblazing troubadour with an Indigenous heartbeat sound. Let Spirit Child open your ears, heart, and mind to a new folk-rock reality.