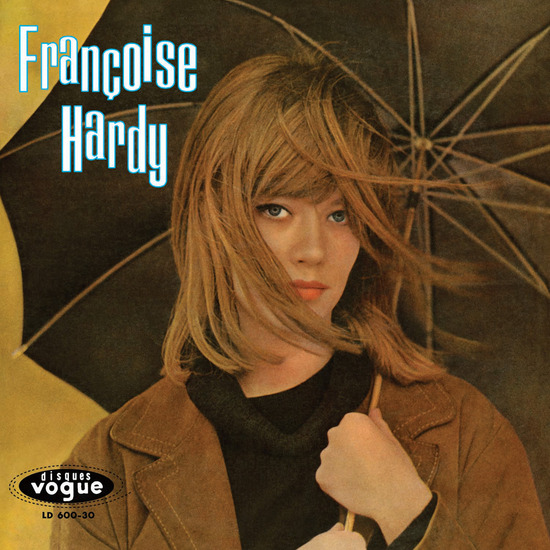 Between 1962 and 1966, Françoise Hardy released one French-language album per year. Each, strictly speaking, was eponymously titled and each was collected from a series of contemporary four-track, seven-inch, picture-sleeve EPs–pop music’s main format in France, known as le super 45. In them, we see the maturing of one of the decade’s most singular talents– a pop singer with the heart of a chanteuse, a singer-songwriter in an age before such a thing was known, and a style icon who valued privacy and modesty. Remastered from the original tapes, we present the first five Françoise Hardy albums in their original French format, on deluxe LP and CD.

Raised by her mother in Paris, Hardy’s upbringing was strict, and she was, she notes today, “a very, very shy person." Records and Radio Luxembourg provided escape and inspiration–her two loves were Chanson Française, the Gallic style of Edith Piaf and Charles Aznavour, and rock‘n’roll. The Everly Brothers, she says, were a “lightning bolt.”

Sent to The Sorbonne to study political sciences, Hardy instead pursued a career as a singer, auditioning for a number of labels before Johnny Hallyday’s Disques Vogue snapped her up, intending to market her as a female rocker–the track “Oh Oh Chéri” here gives you a window into their vision. Hardy had other ideas and was determined to record her own songs, written in French, too. The runaway success of one of her own tracks, the iconic “Tous Les Garçons Et Les Filles,” proved Hardy right.

Hardy soon captivated the rest of the world–she was immortalized in 1964 in a poem by Bob Dylan, she associated with The Stones, and dined with Beatles Paul McCartney and George Harrison. She also soon gained more creative control over her music, and she now distances herself from these early recordings where this was not the case. “Even if I had been able to say something about the production,” she says now, “maybe I would have been listened to, but I didn’t know anything.”

In the album’s title track, Hardy sang about being a soul in torment, and this is the Hardy that emerged–a complicated, pensive outsider, part pop singer, part chanteuse, and utterly unique.

And she will forever personify a particularly French brand of cool.