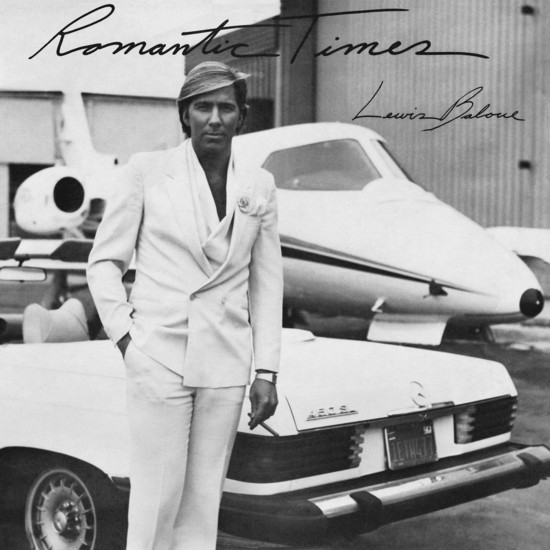 Earlier this year, we released the mysterious, bewitching L’Amour, a 1983 private press record thought to be the only release by one of music’s true lost talents: Lewis.

So lost, in fact, was Lewis, he eluded every effort to track him down. Scant details were known: just a series of possibly apocryphal stories about a sports car-driving Canadian with a model on his arm and a habit of skipping town when there were bills to be paid.

Deciding that Lewis’ spider web-delicate songs demanded to be heard, we put the album out anyway, offering to present the due royalties to anyone who could prove they were Lewis.

One sure thing was this: Lewis was a man of many names: Randall A. Wulff among them. Now we have either found another alias – or perhaps even his real name – on the sleeve of a completely unknown album.

Sourced soon after the re-release of L’Amour, Romantic Times is the 1985 follow-up to L’Amour – and it’s released as Lewis Baloue. The name may be slightly different, but this is absolutely our man: a familiar blond posing on the sleeve, a familiar, tortured voice pouring his heart out over languid synths and synthetic waltz beats.

Remastered from a sealed, vinyl copy of the ultra-rare album, the album was discovered in the vaults of DJ and collector Kevin “Sipreano” Howes in Vancouver, BC. It’s so rare that what is, at present, the only other known copy – found in the same Calgary store where Aaron Levin discovered a batch of sealed copies of L’Amour – is presently soaring into quadruple digits on eBay.

Even engineer Dan Lowe, credited for working on the album at Calgary’s Thunder Road Studios, remembered little about the session other than that Lewis seemed to be “under the influence”. Yet the music is utterly captivating.

The album further fleshes out the Lewis myth – we see him pictured in that white suit with his famous white Mercedes and a private jet too; we hear him focussing more intently on matters of the heart, and appearing to unravel in the process. “I felt like I was witnessing a full-blown exorcism of a phantom clad in the finest linen,” writes filmmaker and historian Jack D. Fleischer in his brand new liner notes. “This record went further [than L’Amour ]. It was a personal plea, of sorts. Something had gone wrong. Nerves were clearly exposed.”

It paints Lewis, then, as being more like a David Lynch character than even his debut did, exposing the darkness beneath the sheen. The album is presently being readied for release to the throng of new fans Lewis has found, willingly or not. The man himself remains a total enigma.