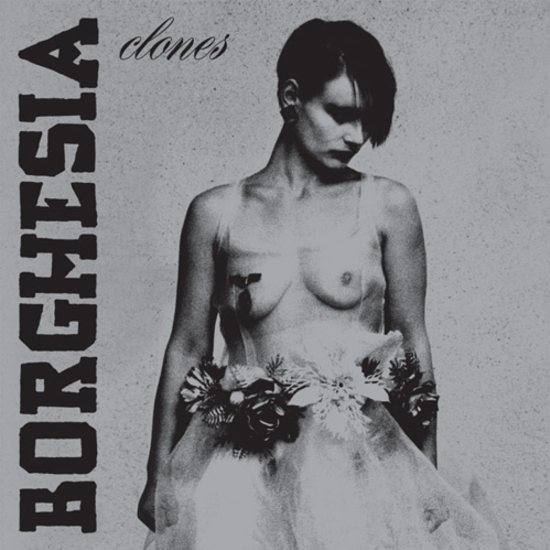 Borghesia is an electronic music group, founded in 1982 in Ljubljana, Slovenia. The band was formed by four members of alternative theatrical group Theatre FV-112/15: Dario Seraval, Aldo Ivancic, Neven Korda and Zemira Alajbegovic. They established FV Video to self-publish their video projects and FV Založba – the first independent record label in ex-Yugoslavia. Aldo and Dario took care of songwriting, production and recording while Zemira and Neven handled the visuals. In the late 80s the band signed to PIAS and went on to release a string of successful albums and played world-wide tours.
“Clones” was Borghesia’s second album, self-released on cassette only in 1984. The band borrowed synthesizers (Roland SH-101, Casio VL-1, Korg Polysix) and a Roland 808 drum machine from friends. Every song was played live – no overdubs – and recorded to a cassette deck over a few nights at their club Disco FV during 1983-1984. The music on “Clones” is meant to accompany various video installations and performances. All of the songs are instrumental and feature various cutting edge techniques for 1983. Hypnotic, proto-techno and acid rhythms and synth lines. Music on the A Side of the LP is faster and club oriented while the B Side offers a drugged out soundtrack to get lost in.
All songs have been remastered for vinyl by George Horn at Fantasy Studios in Berkeley directly from the original master tape. Each LP is housed in a silver jacket with original gelatin print by photographer Jane Štravs. A 11×17 fold-out poster is included with unreleased photos and more . After 28 years, Borghesia’s “music for video” is finally appearing on vinyl for the first time.