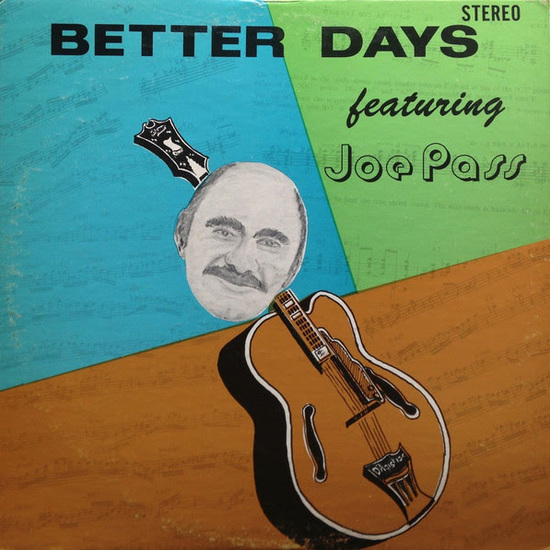 Joe Pass plays funk? Check out the master of mellow guitar, Joe Pass, as he takes on the only thing scarier than a broken string – jazz funk!

Originally released on session legend Carol Kaye’s short lived California label, Gwyn Records, in 1970, the album saw Joe Pass as he explored a genre that was quickly making waves – jazz funk. From album opener and title track “Better Days”, it’s immediately clear that this isn’t your average Joe Pass album. As Kaye’s iconic Fender bass mingles with Marvin Gaye collaborator Paul Nelson Humphrey’s simple yet solid drumming, it’s impossible to mistake this for Pass’s earlier works. Yet his tone is as sweet and mellow as ever, with his masterful bebop soloing a welcome respite from the wah’d out funk guitar playing of the time. Despite his gentle tone, the grooves are deep and rhythmic – ranging from the bossa-inspired “Balloons”, to the lively bass-driven funk of “Head Start”. Of course, it wouldn’t be a Joe Pass record without a solo track. Album closer “We’ll be Together Again” sees Pass alone – his masterful chord-melody techniques and phrasing on full display as he manipulates tempo and time. The subtle tape hiss practically accompanies Pass until the rhythm section comes in – with the quartet’s simple, elegant playing bringing the album to a gentle close. Whether you’re on the dance floor, or in a cafe, this is one album that you absolutely must not miss. P-VINE is proud to be reissuing Joe Pass’s Better Days on limited edition vinyl for the first time ever!