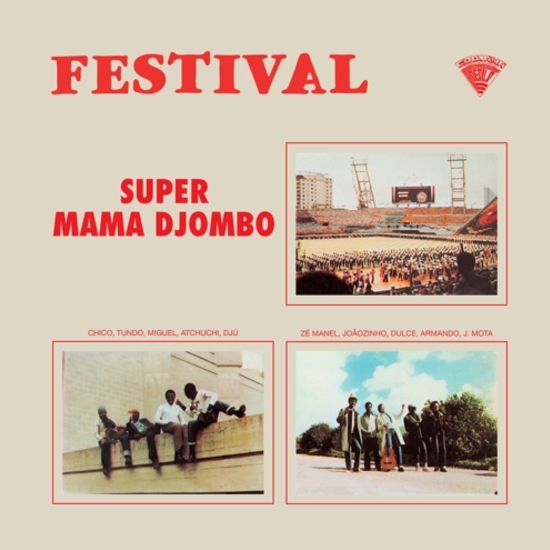 Hailing from a boy scout camp deep in the jungle of late 1960’s Guiné-Bissau, Super Mama Djombo’s founding musicians have come a long way to display their wonderful music to the world! Drummer Zé, singer Herculano, and original guitar players Gonçalo and Taborda picked the name Mama Djombo as an homage to a local goddess revered by independence fighters.

Tiny Guiné Bissau is located between Senegal at its northern border and Guinée Conakry on its eastern and southern border. A former part of the mighty Mali empire, it was then one of the last African countries not to have gained its freedom from Portugal, its colonial power. Hence a fierce war for independence struck the country, until independence was eventually won over in 1974, after many years of suffering.

Some of their early songs were roughly recorded when the band played live over Guiné Bissau’s national radio, after the country won independence in 1975. Without a proper recording studio in Bissau, the orchestra took off for Lisbon in January 1979. For less then a month, Super Mama Djombo recorded hours of music from their vast repertoire at Valentim de Carvalho studios. The production gave the band new horizons to their music, if not for the use of the Echoplex effects on the drums which added width to the production.

Following the first release Na Cambança, the Festival album stands as a tribute to that large Cuban event from 1978. On the ten minute title track, Super Mama Djombo despises imperialism of any kind. It praises Amilcar Cabral and Che Guevara while keeping the beat alive with an almost spacy echo. In the same vein, «Sociedade de malandros» condemns nepotism and a «thieves’ society». Made from the same mould, «Mortos nega» showcases the collective talents of the orchestra and its exceptional players. These three songs manage to speak to both the body and the mind alike. The band’s sound is sharp as if the orchestra knew its time had come in this Lisbon studio.

Keeping an infectious beat, the hypnotic «Tamanco» is another winner. More laid back, «Alma beafada» displays the softer side of the orchestra, showcasing the vocal talents of Chico Karuca, backed by a strong sense of collectiveness. Super Mama Djombo’s saudade is highlighted on «Julia», written by guitar player Miguelinho. It tells the loss of two beloved women. Tundu’s eerie playing, dreamy electric guitars, hints of a frail tape loop echo and Miguelinho’s’s mellow singing, let alone the haunting melody, make this song one the band’s masterpieces.

Three more albums would follow before the demise of the band in the early 1980s, due to lack of political support. The new military power in Bissau deposed president Luis Cabral, who was a strong advocate of the orchestra. Now reunited, Super Mama Djombo make up for the lost time and stand as one of West Africa’s greatest orchestras. Listening to «Festival» is truly the best way to enjoy the music of Guiné Bissau’s musical heroes.