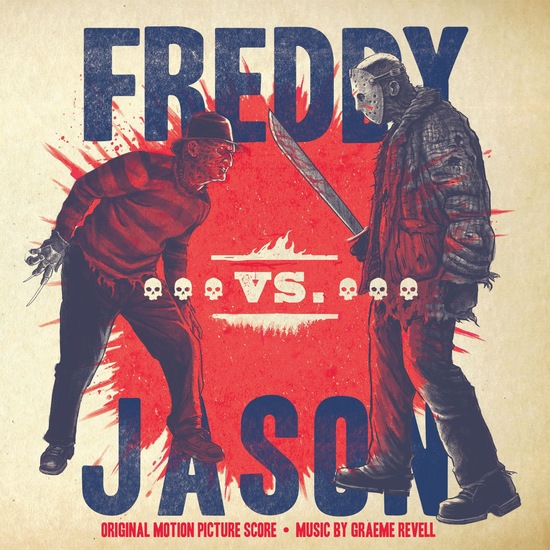 Freddy vs. Jason hit theaters in 2003—60 years after the release of cinema’s first monumental monster team-up, Frankenstein Meets the Wolfman (1943). Directing this long-anticipated monster mashup was Ronny Yu, a Hong Kong action director, who had recently found success resurrecting another 80’s horror icon with 1998’s Bride of Chucky. So to give his latest horror-heavyweight bout a distinct musical identity, he turned to veteran Chucky composer Graeme Revell.

Revell is a New Zealand-born child of the 1960s whose fascination with sound led to an unconventional music career throughout the 1980s. He was a pioneer of “Industrial Music” with his band SPK, a composer of music made entirely of digitally manipulated insect sounds, and an interpreter of the pictorial musical compositions of the artist and Swiss mental asylum inmate, Adolf Wölfi.

With Freddy vs. Jason, Graeme Revell had big shoes to fill. The Elm Street series had featured scores by such prominent composers as Christopher Young, Angelo Badalamenti, Craig Safan and Brian May, and Charles Bernstein’s themes for the original 1984 film had, by 2003, become iconic amongst the franchise’s fans. Likewise, upon the release of the first Friday the 13th film in 1980, Harry Manfredini’s hallmark “Ki Ki Ki, Ma Ma Ma” vocal motif quickly made his score one of the most recognizable in all of horror, if not cinema in general. So, taking on a project combining two of the film industry’s longest-running franchises with such rich musical histories was no easy feat.

Revell rose to the challenge with a score that manages to feel familiar without ever relying on the work of previous composers to do the heavy lifting. His musical nods to earlier films are brief but effective. For example, the cue “Girl with No Eyes” utilizes a few lines of Elm Street’s “One, Two, Freddy’s Coming for You” nursery rhyme, and “Jason’s Surprise Attack” and “Jason’s First Dream” feature flourishes of Manfredini’s “Ki Ki Ki, Ma Ma Ma. With the tracks “Gibb Meets Freddy” and “Jason’s First Dream,” Revell uses the sound of clanking pipes in a way that not only sonically represents the scenes’ boiler room setting but subtly captures the feel of Bernstein’s original Elm Street theme, without directly quoting it.

The score’s natural strengths, though, lie in Revell’s new classical material, which helps to counterbalance the film’s kitsch and gore with an air of elegance and gravitas.

Though heavily weighted in the world of classical music, Revell’s score for Freddy vs. Jason, like much of his other work, is a progressive hybrid of eclectic sounds, instruments, and styles. It features lush orchestral pieces, as well as horror staples like screeching strings and atmospheric drones. Still, in keeping with his musical sensibilities, Revell frequently builds tension and intensity by incorporating digital samples and rigorous EDM and Industrial rhythm beds. He even managed to slip in some blues and heavy metal guitar.

Graeme Revell’s score for Freddy vs. Jason may not deliver horror’s greatest hits or cater to listeners looking for another 1980s throwback synth score. Still, it is a powerful and effective musical work created by an exceptionally imaginative composer for one of the most anticipated horror films of all time. Now, finally making its long-awaited debut on vinyl, it is a worthwhile treat for all horror lovers, soundtrack collectors, and vinyl heads alike. (J. Blake Fichera)