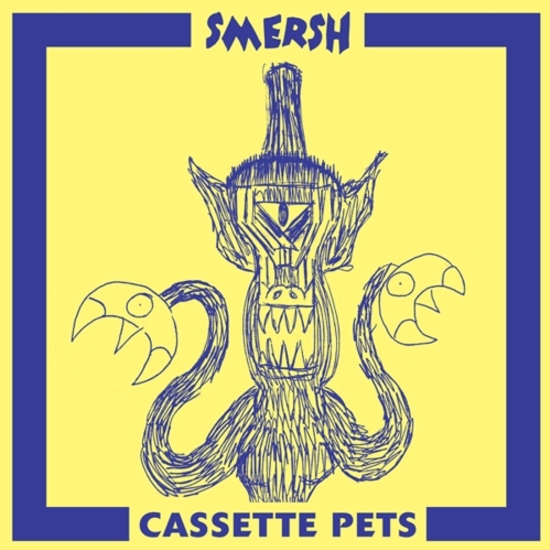 Dark Entries has dug deep in the New Jersey basement of Smersh to release the double LP compilation “Cassette Pets”. Smersh was the duo of Mike Mangino and Chris Shepard, who started writing music together in the late 1970s. They were uninterested in traditional notions of songwriting or live performance. Everything they needed was in Piscataway NJ: a basement full of musical toys and instruments, novelty space microphones, a TR-606 (the same “Roland” who was listed as a member of Big Black), a SH-09 (Cabaret Voltaire’s favorite synth), and — perhaps most importantly — a couple of tape recorders. Most Monday nights, they would write a new song from scratch. A couple hours later, the song was recorded, never to be performed again.

By 1981, this dedication to spontaneous creativity had already produced countless recordings, and the duo began releasing cassettes as Smersh via their own Atlas King label. A definitive Smersh discography may not even be possible, but one lists more than 30 Atlas King cassettes. As these tapes traded their way across continents, Smersh developed a devoted following in places far beyond Piscataway, leading to releases on dozens of other labels from around the globe. For “Cassette Pets” we have selected 17 songs, featuring some of the many highlights from Smersh’s vast discography, spanning 1981-1994.

Smersh’s sound is a lush hybrid of techno, industrial, dance, and experimental. Sometimes easy, sometime not. Most songs revolve around driving EBM style beats, intricate industrial noise manipulation and synth melodies. The Smersh sound has so many faces it doesn’t fall into any one category.