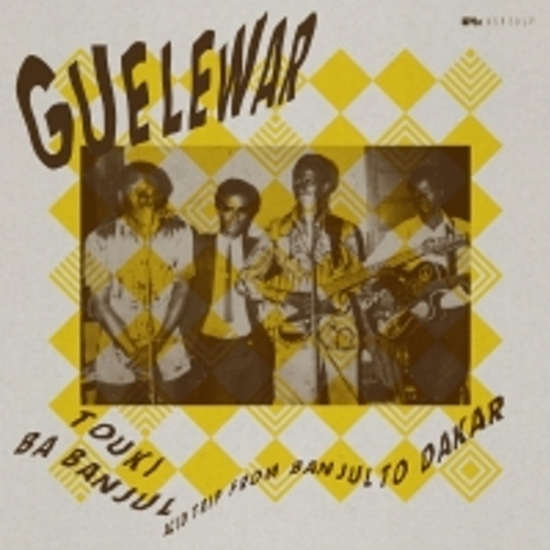 Touki Ba Banjul is a compilation on of the Senegalese psych sensation Guelewar who played a major part in the development of the Afro Manding sound. From 1979-1982 the band released four albums, featuring some of Senegal’s best funk tunes. This double pack LP features the highlights of these four rare albums.

Before Guelewar, Laaye N’Gorn, the lead singer of the band, was already one of Gambia’s most celebrated artists. He was the centre figure in The Supreme Eagles, with whom he played as the main act in one of Gambia’s succesful clubs ‘The Bambo No.1 Night Club’. In return for the succes the clubmanager off ered them instruments, after which they renamed their band to the Super Alligators. Due to the mixture of western infl uences such as soul and funk with tradional and regional rhythms like boogaraboo and sawrouba, The Super Alligators had a unique sound. The result of this blend is known as the psychedelic sound of Gambia (Senegal). In 1973 the Super Alligators decided to rename the group to Guelewar, Wolof’s for ‘noble warrior’.

After a turbulent couple of years with many musicians joining and leaving the band, Laaye managed to reform the band in order to record their fi rst album in 1977. Over the course of the following five years Guelewar released a total of four albums, which are all filled with deep psychedelic funk gems. Due to the limited pressings, these albums are very much sought after by collectors. Kindred Spirits compiles the highlights of these albums which are presented on this double LP. Touki Ba Banjul is not only a must have for collectors of African music, but for music lovers worldwide.