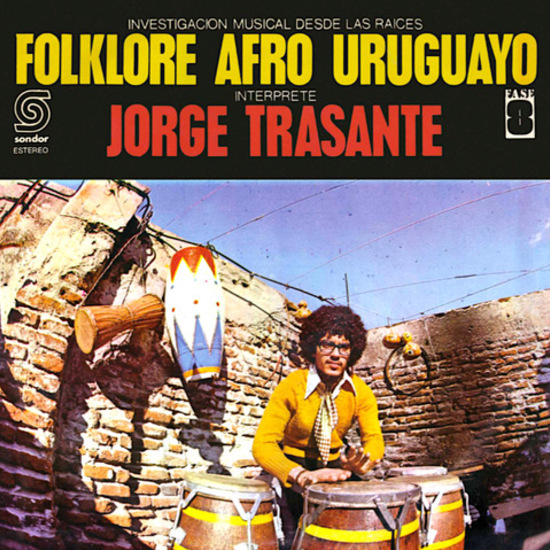 A masterpiece of South American percussion, recorded in 1977 by worldwide legend and Gipsy Kings percussionist Jorge Trasante—and impossible to find for decades—finally reissued!

“In the mid-’70s I was struck by a young Uruguayan percussionist named Jorge Trasante. I met him accompanying Rada and Pippo Spera, in recordings in the Sondor Studio. He turned out to be an experienced percussionist and remarkable musical researcher, despite his young age, only 23 years old. At that time he invited me to a rehearsal with Eduardo Mateo, at his house in El Cordón. We decided to record the album “Mateo y Trasante”, which today is an iconic album of Uruguayan music. And at the same time, I suggested to Jorge, to record an LP of instrumental percussion, based on Afro Uruguay rhythms. It became his letter of introduction when a few months later he traveled to Europe, where he joined very good groups, including the Gipsy Kings, with whom he recorded 18 albums between 1987 and 2001, and also accompanied other great artists. Jorge Trasante settled in Paris, France, where he lived for more than 30 years. The album “Folklore Afro Uruguayo” was not a success of the moment, but is a sound document which maintains its validity through time.” —Enrique Abal Oliú

“I left (Uruguay) in early 1977. We were finishing a cycle with Mateo, Buscaglia, Yánez and Mariana Vigil. I studied technical drawing at the Universidad del Trabajo del Uruguay… and worked in a cigar and cigar factory—that was my mother’s trade—which allowed me to buy the instruments that Emilio Acevedo made in Ansina 1036; he was the great teacher. The first drums I paid for in a thousand installments. He would lend me pailas, Ameijenda or Galletti would lend me a cymbal, I never had anything.

I left because here I was very “wounded" and the political thing got very hard with the dictatorship and the music weighed more than everything. I decided to jump to Europe, where there were great friends. And I went with 70 kilos of drums to Paris to Mario Aguerre, former bassist of Los Delfines. Knowing that I had arrived, Emilio Arteaga called me and he proposed to set up a group with Jorge Pinchevsky, a great Argentine violinist who had played in La Pesada del Rock & Roll. We set up an experimental group with Latin rhythms to play on the street, in clubs, where he would paint. I used to play a set of congas, timbales, and we made Andean music, very fashionable then… and that summer of 1977 in the south of France we did very well. There I crossed paths for the first time with the Gipsy Kings, who also played on the street doing “the manga” with their gypsy rumba.” —Jorge Trasante