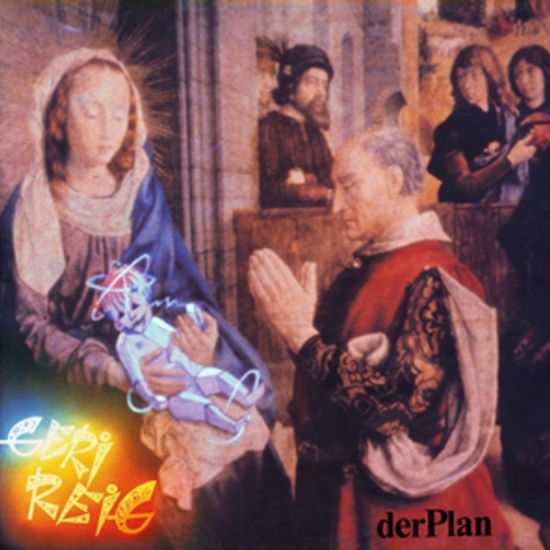 Debut full length album originally released in 1980 on Der Plan’s own Warning (later known as Ata Tak) label. Der Plan is widely acknowledged as the pioneers of the Neue Deutsche Welle (New German Wave) movement which was the transformation of punk rock and new wave into an entity of distinct form and style. The movement spawned other notable acts as Grauzone, Deutsch Amerikanische Freundschaft (in fact Robert Görl and Chrislo Haas were early members of Der Plan on their debut single “Das Fleisch”), and Xmal Deutschland.

Der Plan originated from Düsseldorf and consisted of Moritz Reichelt (aka Moritz R®), Frank Fenstermacher, and Kurt Dahlke (aka Pyrolator – ex DAF) on this recording. “Geri Reig” is a very diverse album consisting of tracks reminiscent of the early Der Plan avante garde period contrasted with more musical and catchy songs geared more towards minimal synthetic pop and experimental minimal synth. It has not been available on vinyl since it’s original release in 1980.

The opener “Adrenalin Lässt Das Blut Kochen” is a hypnotic, pulsing ride interspersed with freeform synth textures. Vocal pitch-shifting makes it presence on “Geri Reig” and is style detectable in a number of Der Plan songs. “Gefährliche Clowns” is a rather minimal number with an infectious melody. “Commerce Extérieur Mondial Sentimental” was featured on the “New Deutsch” compilation and is a wonderfully sequenced piece with a melodic lead intertwined.

The album is also intermixed with multiple experimental tracks which in composite result in a ground-breaking and pioneering document of the Neue Deutsche Welle scene. Medical Records is proud to present “Geri Reig” with original cover art (enhanced and overseen by Moritz R himself). This masterpiece is presented on 180gram olive green colored vinyl in a limited edition of 550 hand-numbered copies.