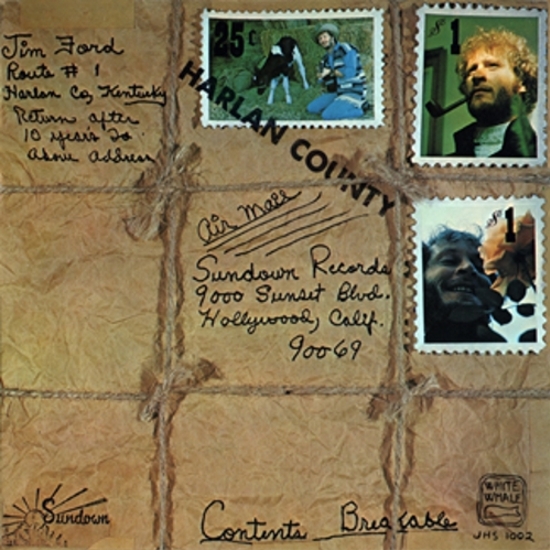 “Jimmy Ford is the baddest white man on the planet.” – Sly Stone

“Jimmy was a beautiful cat, one of the most creative people that I’ve ever met.” – Bobby Womack

Here’s how it went down: Jim Ford, a musically minded country boy from rural Kentucky heads to the Golden State with dreams of making it. Making the scene in Los Angeles, he befriends and writes songs for such artists as Bobby Womack (“Harry Hippie”), Aretha Franklin, P.J. Proby, The Temptations, and even appears on Sly & the Family Stone’s There’s a Riot Goin’ On. He eventually hooks up with legendary session players Dr. John, Jim Keltner (John Lennon), and James Burton (Elvis Presley) and books into the equally legendary Wally Heider Recording Studios to cut an album of blue-eyed country-funk and soul. The year is 1969.

What came next was a series of missed opportunities, burned bridges, and a few decades lost to drug abuse. And what’s left? Harlan County

Released in 1969 on the minor label Sundown Records, Harlan County simply fell through the cracks between monster selling titles by The Beatles, Led Zeppelin, and Creedence Clearwater Revival. Despite being allied with some of the biggest names in the business and a deft musical touch, Ford never struck gold as a solo artist and eventually left the often cutthroat music business for a quieter life at the turn of the 1980’s.

“Jimmy Ford is the baddest white man on the planet,” said Sly Stone of Jim Ford, and listening to Harlan County today who’s to argue? Needless to say, Light In The Attic Records are honored to re-release these ten country-funk gems on CD and 180-gram wax with Ford’s original cover artwork, beautifully re-mastered audio, extensive liner notes by Kurt Wolff (The Rough Guide to Country Music), and rare photos. Fans of Charlie Rich, Tony Joe White, Lee Hazlewood, and Bobby Charles, please take note. Harlan County is a revelation to deep music heads and for the previously converted, an opportunity to revisit one of the California studio scene’s crowning glories. To quote the title of Wolff’s booklet essay, “Jim Ford’s Music Will Kick Your Ass And Blow Your Mind.”