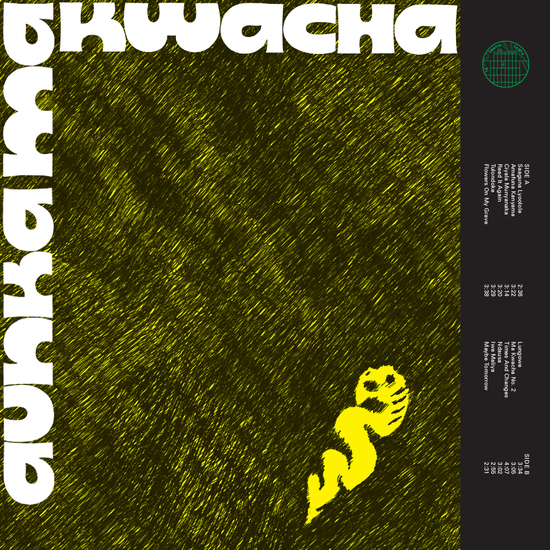 There is music that falls right into place, a perfectly articulated expression of a few distinct influences. Then, there is another kind of median music, something more mysterious, the result of time, place, technology, and alchemy. Zambian writer and musician Smokey Haangala’s Aunka Ma Kwacha (The Money is Gone) released in 1976 is an example of this more mystical metallurgy, falling somewhere between psychedelic Zamrock, US folk, Kalindula, and Sundown Beat (music played after dark) from Tongaland. The unique mix of languages on the album (Bemba, Tonga, Lozi, and English) also suggest this complex cultural crossroads. Underlying the whole album is the insistent beat of a simple drum machine, which was totally unheard of in Zambia at the time, and parallels pioneering experiments by Francis Bebey, Sly Stone, and Shuggie Otis, utilizing a technology which would later come to define dance music. Then there’s the album’s original artwork by Peter Kependa, done in style similar to the infamous Jamaican dancehall illustrator Wilfred Limonious, interpreting the album’s title and primary theme; the burden of financial inequality. In this sense the album is political, but the theme is extrapolated and explored through its impact on personal life; love, marriage, social status, and diet. The album is full of cautionary tales, folklore and references to magic, aspects of Zambian culture simultaneously mystifying and alluring to outsiders, part of what attracted Western readers to Nigerian writer Amos Tutuola’s hallucinatory Yoruba folktales. After becoming a household name in Zambia for his music, writing, and television appearances, Smokey Haangala died at the age of 38, the very week his book The Black Eye was published, abruptly ending his brilliant and ascending career. We are lucky to have his inimitable work to remember him by, Aunka Ma Kwacha resting comfortably in the pantheon of re-visionary works by Rodriguez, Kissoon Ramasar, TJ Hustler, and William Onyeabor.