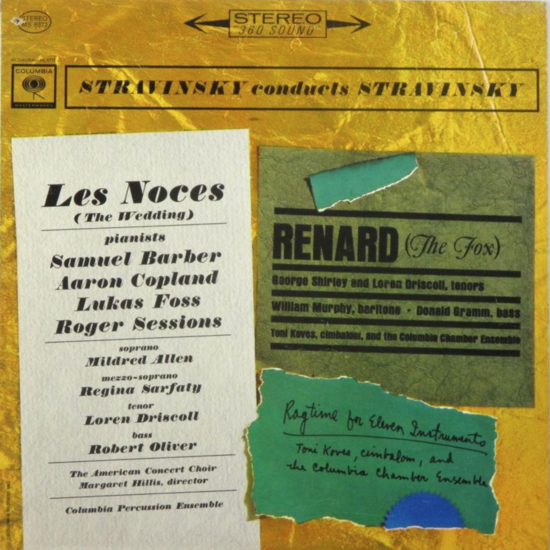 Although ten years separate the gigantic composition “Le Sacre du Printemps” and the dance cantata “Les Noces”, the more recent work has several things in common with its scandalous predecessor. Originally Stravinsky planned to use a vast orchestra of 150 musicians, but decided after numerous attempts to settle for four pianos, percussion, voices and mixed chorus. Concealed behind the innocuous title is not a peasant wedding but once again an archaic ritual, »which takes possession of several of the central figures, drives them on and eventually crushes them with its unrelenting movement« (André Boucourechliev, Igor Stravinski, Fayard 1982). Ballet, rhythmic dance through and through, fuses with Russian melodic song and thereby exudes a folkloristic exoticism.

Rarely performed yet zestful and a sheer delight for the ears is the burlesque tale “Renard”, a musical fable about Reynard the crafty Fox, the Cock, the Cat, and the Ram.

Stravinsky himself conducted this recording made with a grand line-up of America’s top composers at the piano keyboard – Samuel Barber, Lukas Foss, Aaron Copland and Roger Sessions. One certainly can’t ask for more authenticity on record than these contemporary witnesses.