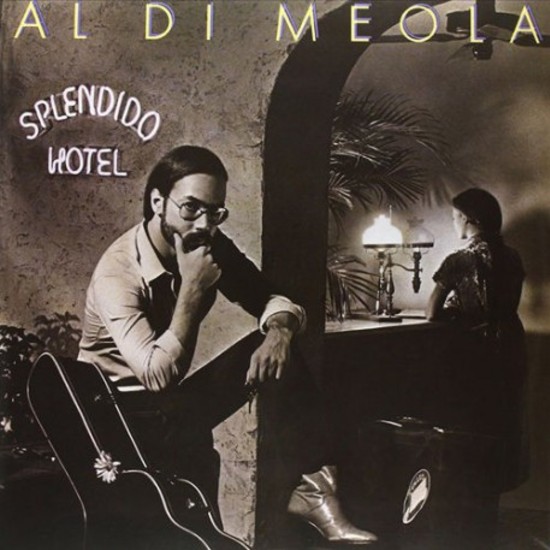 Just how much creative gunpowder had Al Di Meola ignited in his early career? First of all there was the flamenco firework in the best-seller “Elegant Gypsy”, and secondly his mega-successful live album resulting from a summit meeting in San Francisco with Paco de Lucia and John McLaughlin. After this great start it was no wonder that such prominent colleagues as Jan Hammer, Chick Corea, Steve Gadd, Anthony Jackson and Les Paul were eager to participate in the present album “Splendido Hotel”.

This great line-up of musicians produce a rich, saturated sound and create numerous ‘flavours’ in this cocktail of sounds, which – as a double LP – can be likened to a fantastic long drink, as it were. Di Meola’s idea of fusion starts off in the opening number as a slow, sluggish oriental-like melody, which develops to take on a rock rhythm. High-speed and lovingly detailed flamenco such as is found in “Splendido Sundance” alternates with subtle rhythms (“Two To Tango”) and good-humoured lighter numbers with an electronic undertone such as “Roller Jubilee” and a funky version of Bert Kaempfert’s “Spanish Eyes”. With this great mix, the musicians create a wonderful atmosphere in which every Latin aficionado will feel at home.