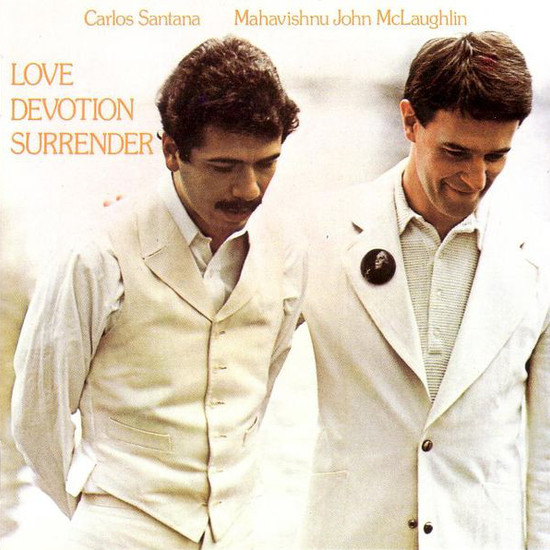 For some, “Love Devotion Surrender” is an album where, exceptionally, John McLaughlin plays the piano and organist Jan Hammer plays the drums. For others, it is the most spiritual album ever by Carlos Santana. And though both disciples were shown the way and inspired by the same guru (Sri Chinmoy) at one and the same time, this album is filled with the spirit of John Coltrane. In order to communicate their differing understanding and interpretation of Trane’s music, the two musicians formed a ‘project band’ made up of members of Santana’s ensemble and the Mahavishnu Orchestra. In their performance of “Love Supreme”, Santana’s somewhat dragging melody-maker role amalgamates with McLaughlin’s high-speed staccato to a viscous drive. This approach functions just as well in slow motion: Coltrane’s miniature, slow composition “Naima” is performed in a flowing and inspired manner by the duo on their acoustic guitars.

The arrangements carry Santana’s hallmark: the occasionally somewhat intellectual but certainly not long-pondered-over sound is enhanced by the sound of agitated congo beats and the chanted vocals are heard as if from afar. By the time fans of Santana’s major albums have got to the expansive gospel song “Let Us Go Into The House”, they will have rediscovered their Carlos and his timeless solos once again. It is apparent that love and devotion are by no means just memorials of a time gone by but a surrender to oneself in its most perfect form.