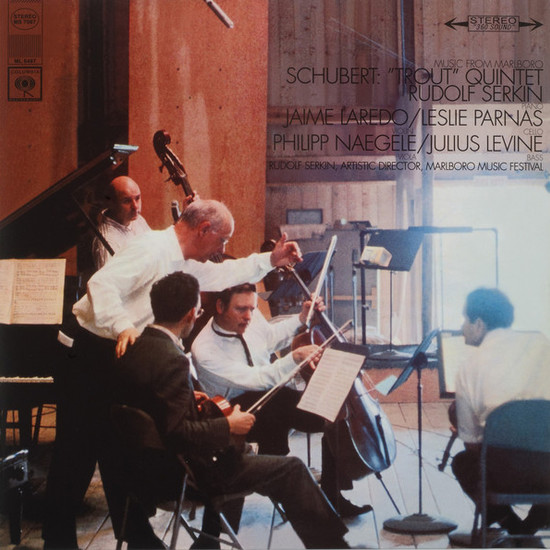 Ever since its foundation by Rudolf Serkin in 1950, the Marlboro Music Festival in Vermont, USA has acted as a refuge, oasis and melting pot for promising composers and performers of the times. And to this very day, young musicians from all over the globe come together for seven weeks to test their prowess, to learn from one another, and to receive tips and final polish from more experienced colleagues, quite in the spirit and traditions of this summer academy.

Rudolf Serkin himself not only stood behind this particular recording of Schubert’s “Trout” but also took over the piano part. His renowned crisp and precise style of playing draws the four string players into the eddies of the first movement and causes the lively rising and falling chains of chords to whirl through the swiftly changing harmonies. The strings nestle together as though magnetised, striking out in broad arches of melody, then changing as quick as a flash from the role as soloists to pulsating accompanists who are always joyfully prepared to catch on to a new melody in the part writing. Both the Andante and the fourth movement, a theme and variations on Schubert’s lied “The Trout” which lends its name to the work, flow along with a highly cultivated tone that is mellow yet not over-sweet. The dancelike Finale is fresh and exciting, with the musicians taking up repeats of musical material from the previous movements and thus imparting a cyclical effect to the work. This festive Schubertiade from the heart of chamber music will certainly have delighted maestro Schubert.