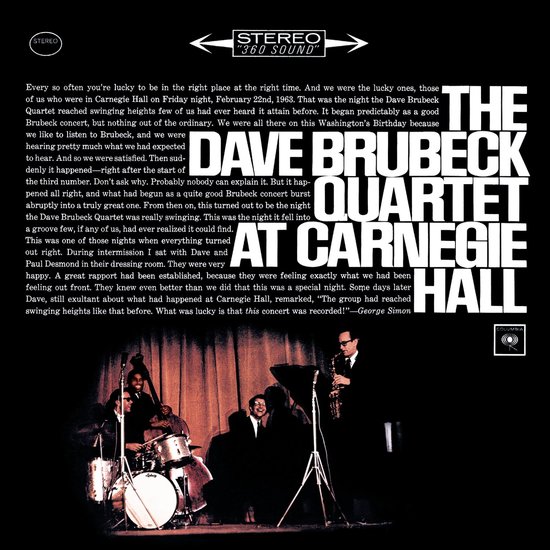 Many critics regard Dave Brubeck’s Carnegie Hall concert from February 1963 as his greatest ever live appearance. But who can really determine that? For no one – apart from Brubeck himself – would have seen and heard his conservatively estimated 12,000 concerts.

Although the twelve titles had already been released on LPs that had been recorded in the studio, these records were certainly not known to all those in the audience. In between the numbers on each LP, Brubeck made little ‘advertising spots’ in short comments, but with such charm and wit that one really cannot be angry with him.
The concert programme begins with “St. Louis Blues” and ends with “Take Five”. Luckily, the solos are distributed among all the musicians, so that Paul Desmond and Joe Morello – whose prowess on this evening can only be called ‘amazingly good’ – justifiably received enthusiastic applause from both the audience and us alike. “Castilian Drums” demonstrates Morello’s wealth of ideas and his grandiose feeling for rhythm; though short, Paul Desmond’s solos (“Southern Scene” is a good example!) are compelling, highly melodic, lyrical and possess a unique tone – as such they are immediately recognisable.

How fortunate that the twelve brilliantly improvised numbers are now available once again on vinyl, having been recorded live at the legendary Carnegie Hall 60 years ago.