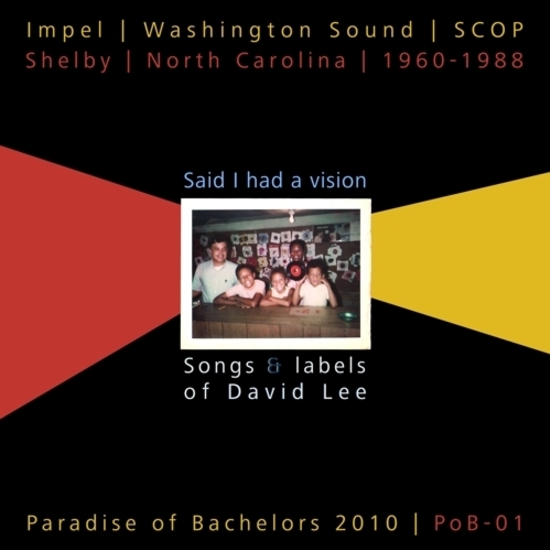 Paradise of Bachelors is proud to release the first-ever anthology of the eclectic, excellent, and highly collectable music of David Lee. Over the course of three decades, beginning in the late 1950s, this unheralded songwriter, musician, producer, and entrepreneur released fourteen 45s and two LPs on his Impel, Washington Sound, and SCOP labels, run out of his Washington Sound record shop in Shelby, North Carolina. He wrote most of the songs himself, including the devastating lament “You’re Letting Me Down,” which he recorded in 1971 with a then-unknown young Greenville, South Carolina soul singer named Ann Sexton. As reissued by Nashville DJ “John R.” Richbourg on his Seventy-Seven imprint, that record became the biggest hit of Mr. Lee’s long and impressive career, though hardly his sole accomplishment.

With a deeply emotive, colorblind songwriting style and eclectic tastes that embraced soul, gospel, rock, pop, and country, he ignored entrenched Southern genre and audience conventions, collaborating with local black and white musicians alike, including pioneering teenage “salt and pepper” combo the Constellations. The fruitful working relationships he developed with an array of legendary but obscure groups from the North/South Carolina borderlands—Joe Brown and the Singing Mellerairs, Brown Sugar Inc., Yakety Yaks, et al.—attest to his tremendous talent, his easy manner, and his tireless work ethic.