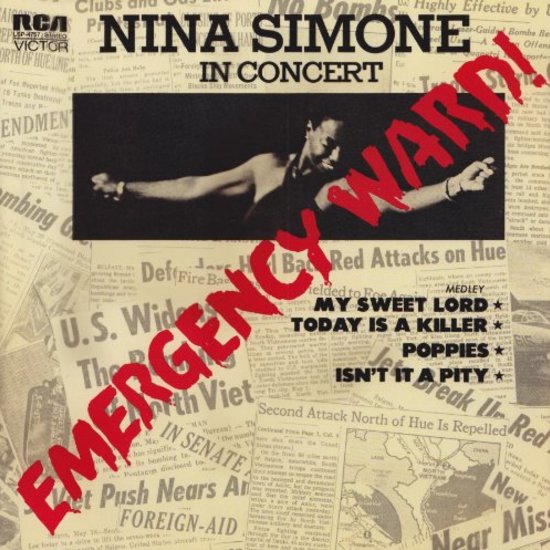 We can thank our lucky stars that Nina Simone was well aware of her musical environment and enjoyed experimenting with it, despite her notorious eccentric personality. This was the only reason that so much basic repertoire, traditional blues numbers, black work songs and favourite white show melodies – all filled with a deep soul feeling – reached her fans. “Emergency Ward!” is no exception. First there is the explosive medley, recorded live, of George Harrison’s “My Sweet Lord” and David Nelson’s “Today Is A Killer”. Accompanied by a small combo and a gospel choir, Nina Simone ignites an 18-minute blazing bonfire which loses none of its spiritual fire for even a second.

In contrast to the gentle “Poppies”, extravagantly produced with strings, woodwinds and chorus, is the questioning “Isn’t It A Pity”, arranged for piano. Here, simple, throbbing harmonies are occasionally allowed to swell into clouds of chords, giving Nina Simone the opportunity to show off her highly diversified vocal timbre which, as so often, fades away into nothing like an unanswered question. This is an exceptional album filled with a wealth of feeling and one which will leave no one untouched.