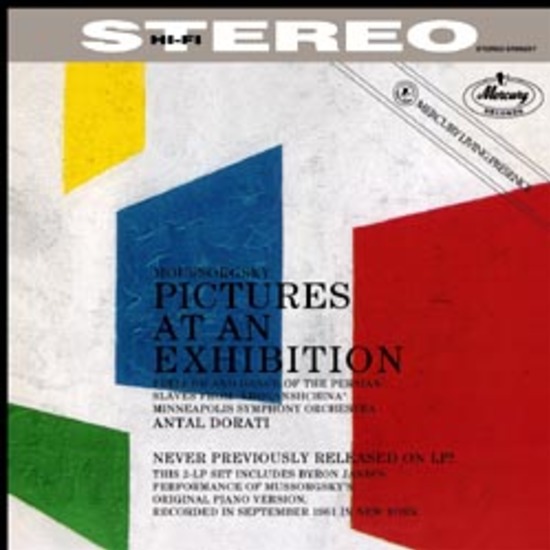 The orchestral version of Mussorgsky’s musical picture gallery has always been one of the most popular works ever heard in concert halls all over the world. Originally written for the piano, the unsuccessful composer never heard the work in all its symphonic glory, although many of his contemporaries had often been tempted to arrange his works. As early as 1891, ten years after his death, Mikhail Tushmalov – a pupil of Rimsky-Korsakov – presented a first version. However, it is Maurice Ravel’s orchestral version from 1922 that remains unsurpassed to this day. His arrangement amalgamates the original force and angularity of the piano with the brilliance of a modern orchestra.

The transparent and powerful performance by the Minneapolis Symphony Orchestra is complemented by an equally fascinating version from one of Mercury’s main pianists, Byron Janis. In listening to the two interpretations one after the other it becomes clear as to how closely Ravel remained true to the original version while still managing to imbue his genial orchestral version with his own tonal conception. The solo piano recording, released for the first time on vinyl, will certainly be of special interest to record collectors.