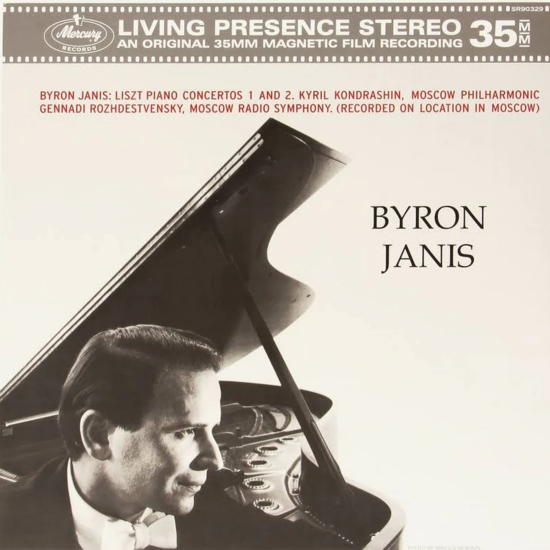 Liszt’s Piano Concertos occupy a special position in the genre for several reasons. Firstly they mirror the amazing keyboard virtuosity of the composer, and secondly they point the way to modern music through their daring harmonies and free treatment of traditional compositional forms. Any pianist who tackles the mighty E flat major Concerto, which was premiered by Liszt himself under the baton of Berlioz in 1855, soon realises that he has taken on a mammoth task. Instead of an over-dimensional, weighty performance, Byron Janis and the Moscow Philharmonic present a compact reading of this tightly-knit composition. Janis, a pupil of Horowitz, displays his bravura in the appropriate places, but also knows how to use his technical prowess – perfected in his early years – to produce finely-chiselled keyboard poetry, freeing the work from its often-cited bulkiness. This is particularly effective in the intoxicating Finale, where the pianist’s brilliance amalgamates with triumphal orchestral playing.

In the Second Concerto, too, it is clear that great care has been taken with the score. Beginning with the elegiac entry, via the pulsating Agitato up to the expressive melodic playing, Byron Janis and Gennadi Rozhdestvensky fill this visionary symphonic poem with wonderful timbral colouring which is brought to a climax in the sparkling Finale. When music from the New German School sounds like it does here by means of Russian hands, then it certainly deserves a place in our Russian Edition.