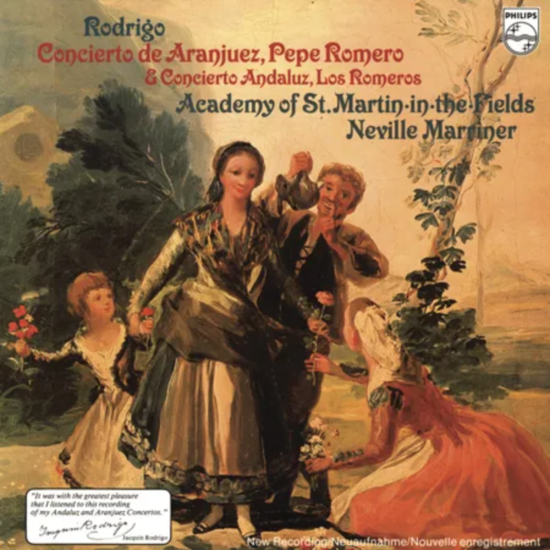 The frenetic applause with which both the public and the experts greeted the Concierto de Aranjuez for guitar and orchestra, composed in 1940, is certainly astounding – one would have thought that 20th-century music was dominated chiefly by composers of twelve-tone music and the avantguardists. Rodrigo, however, remained faithful to the Classical three-movement form, employed a late-Romantic orchestral colouring, and followed in the tradition of Spanish composers who, perhaps more than any others, won their inspiration from the folkmusic of their native country.

The whole work is full of the exotic magic of Spanish folkmusic, whereby the rhythmic drive of the first movement – reminiscent of clicking castanets – is particularly fascinating. Fortunately not only the composer but also the conductor and orchestra have taken care that the gentle tones produced by the world famous guitarist Pepe Romero are clearly to be heard.

In addition, the listener is treated to a performance of the rarely recorded Concierto Andaluz for four guitars, composed in 1967. Once again the Romeros demonstrate that they are not only amazingly virtuosic musicians but are also worthy dedicatees of this unique work.

Last but not least, PHILIPS balance engineers have produced a superb recording: Rodrigo himself was absolutely delighted with it – and this opinion one can well endorse.