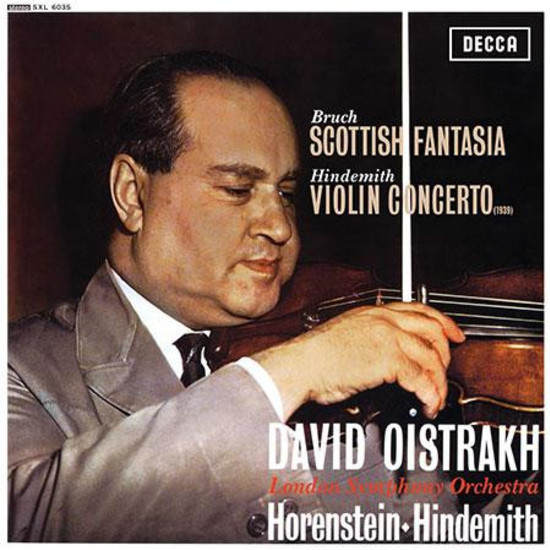 Max Bruch’s Scottish Fantasia is a late-Romantic work which is seldom found on concert hall programmes today. One realises after listening to the piece for the first time that the composition proves to be at least as solid and artistic as all the other works of the composer.

The London Symphony Orchestra, conducted by Jascha Horenstein gives a sonorous interpretation of the melancholic which, according to Bruch, depicted an aged minstrel who, while gazing upon the ruins of an ancient keep, ponders over the splendid days gone by. The well-known slender but warm timbre of David Oistrakh’s violin is well suited to this music which was inspired by Scotland.

David Oistrakh demonstrates his versatility in this performance of Hindemith’s Violin Concerto, written in 1939, where he effortlessly mesmerises the audience with breakneck cascades of scales. With many years of experience in the performance of modern music, the London Symphony Orchestra, led by the composer himself, prove that they are a match for this work.

This DECCA recording offers first class interpretations of two great masterpieces from differing eras that have been acclaimed widely and have reached far beyond the circle of Oistrakh fans.