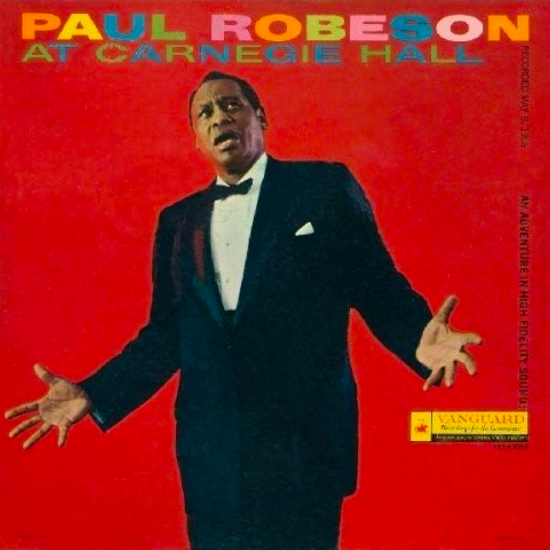 When Paul Robeson took the stage at Carnegie Hall in May of 1958, it had been 11 years since he had previously concertized freely in the United States. Blacklisted from the entertainment industry at home, and with the State Department unwilling to issue him a passport, he had fallen into eclipse as a singer and actor over the previous eight years. The concert recorded here, one of two at Carnegie Hall in May of 1958, marked his return. The performances on this record would also be his only stereo recordings — all were, naturally enough, the work of Vanguard Records, the New York-based record company that was also the home to fellow blacklistees the Weavers. The singing legend is in excellent voice throughout, his rich bass-baritone reveling in performances of a repertory that encompassed Bach, Mussorgsky, Schubert, Dvorák, Beethoven, traditional gospel, Russian and Chinese folk songs, “Old Man River” from Show Boat, and monologues from Shakespeare and the opera Boris Godunov. With a piano accompaniment by Alan Booth, Robeson ranged across a huge part of his own performing history.

The 60-year-old singer, despite the decade of artificially imposed inactivity, still had much of his vocal power intact and all his dramatic instincts, and makes every moment count in his performance, investing immense power in every note and nuance. Sadly, his Vanguard performances were to be his only work captured on modern recording equipment — because of the blacklist, everything else predated the arrival of recording tape and the long-playing record. But the performance captured here, and those represented on Vanguard’s The Essential Paul Robeson, show a man still capable of moving huge numbers of people with his voice — and equally important, even at this late date, who had not lost the ability to walk a crowd through a vast and difficult range of repertory; his performances, even after ten years of professional exile, were also learning experiences, and consciousness-raising, which is why reactionaries in the United States were so afraid of him in the first place. And none of it has lost any of its power in the five decades since the actual event. Bruce Eder/AMG