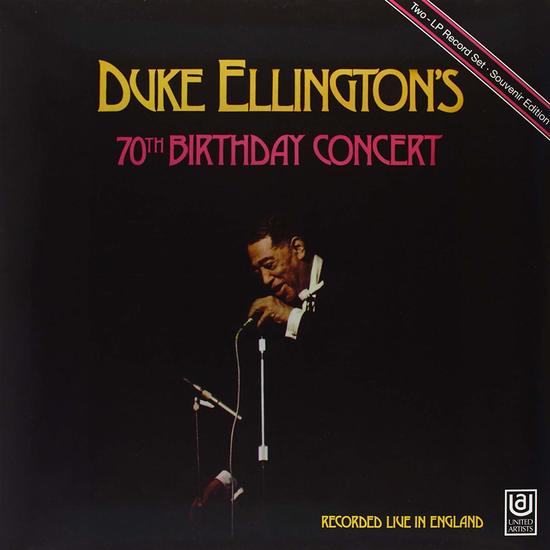 Outside there was the rain and the bone-freezing chill of November in Manchester, England. Inside the concert hall it was warm and it was beautiful. Duke was alive and well, and his orchestra was playing with all the flaring genius that has entranced us since first this musical miracle of our century found his vocation of band-leader extraordinary fifty years ago.

It was one of the many nights to remember during the orchestra’s British and European tour of 1969. Duke played two concerts that evening, each approaching two and a half hours in duration, each without intervals. At the second show he regaled the audience with 32 separate compositions, stayed on stage to do an encore with quartet only, after Johnny Hodges had led the exhausted orchestra away, and then, past midnight, went into a small back room to listen to the whole rumbustious evening played back to him on tape.

The men in the small back room, engaged with dials and consoles and tuners, were the United Artists production team who helped to create this album from the concerts at Manchester and at Bristol. Duke, sitting there easily, eyes closed, smiling like some great all-wise Buddha, seemed pleased with what he heard. From time to time he would say “beautiful!” to some flight of Johnny Hodges’ or Cootie’s. That is how this album is: Beautiful.

Except from the sleeve notes by Derek Jewell, Jazz/Pop Critic, The Sunday Times

This double LP ranks as one of Duke Ellington’s finest recordings of his final decade. The live performance gives listeners a good idea as to just how Duke’s ensemble sounded in concert, and it serves as both a retrospective and a display of the strengths of Ellington’s mighty band. Among the many highlights are definitive renditions of “Rockin’ in Rhythm” and “Take the ‘A’ Train” (the latter has some wonderful Cootie Williams trumpet), a few features for altoist Johnny Hodges, a tenor battle on “In Triplicate,” a few guest spots for organist Wild Bill Davis, and a 16-and-a-half-minute, nine-song medley that really works well. The most memorable chorus of all is an incredible high-note display by Cat Anderson on “Satin Doll” that is arguably his most miraculous solo ever; each note he hits is virtually impossible to play on the trumpet, and is in tune, too. This gem is essential for all serious jazz collections. AMG/Scott Yanow