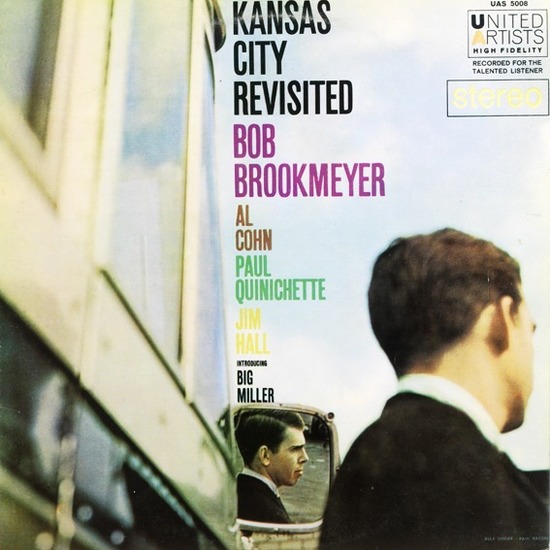 Back in the 1930s Kansas City was a major jazz scene as it was home to Bennie Moten’s Band followed by the Count Basie Jazz Orchestra. Bob Brookmeyer, the virtuouso valve trombonist, who just passed away in the last several months, gathered in 1958 a largely Basie-oriented septet to do honor to the KC scene by recording several standards of the day including “Jumping at the Woodside,” “Blue and Sentimental,” “Moten Swing,” and Travlin’ Light.” In addition Big Miller, who was a featured vocalist with the Fletcher Henderson band, was brought in on vocals to sing on “Travlin Light” and “A Blues.”

The British audiophile LP label, PurePleasure, has re-released Kansas City Revisited. Long out of print, the label used Ron McMaster to handle the remastering, and chose Capitol Studios’ facilities to rework this swinging 1958 issue. For a 50+ year old recording, McMaster has done a fine job polishing up the acoustics. Jim Hall’s guitar solo sounds mighty nice on the opening Basie standard, “Jumping at the Woodside,” with sympathetic backing by the rhythm section of Addison Farmer on bass, and Nat Pierce on piano, though Pierce’s piano is a bit distant in the sound mix.