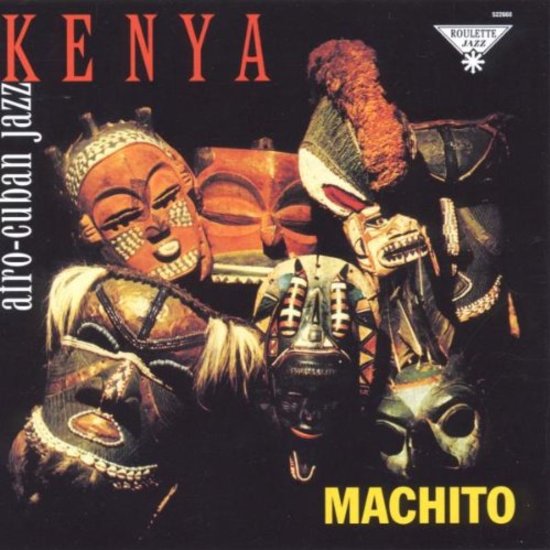 Machito was born Frank Raul Grillo 16th February 1912, Tampa, Florida. Machito played a huge role in the history of Latin jazz, for his bands of the 1940’s were probably the first to achieve a fusion of powerful Afro-Cuban rhythms and jazz improvisation. At it’s roaring best , the band had a hard charging sound, loaded with jostling, hyperactive bongos and congas and razor-edged riffing brass. Machito was the front man, singing, conducting, shaking maracas, while his brother-in-law Mario Bauza was the innovator behind the scenes, getting Machito to hire jazz-orientated arrangers. After an earlier aborted attempt to launch a band with Bauza, Machito founded the Afro-Cubans in 1940, taking on Bauza the following year as music director where he remained for 35 years. Playing regularly at New York’s Palladium, Machito’s band reached it’s peak of popularity during the mambo craze of the 1950’s, when this album was recorded.

This outstanding album, recorded in 1957, in honor of the then recently formed republic of Kenya, highlights the wonderful Afro-American and Afro-Cuban musical language Machito spoke so well.

In this album, Machito has combined all the elements needed in bringing the true meaning of Afro-Cuban jazz music to the listener. Machito, his musical director Mario Bauza, Rene Hernandez and A. K. Salim who along with Mr Bauza composed and arranged this music, define it this way: Afro-Cuban rhythm differs from other rhythms in that instead of the usual drums carrying the rhythmic beat, it is carried by Cuban percussion instruments such as the bongos, congas, timbales, guiros and maracas. Also, and even more elemental, is that although there are four beats to the bar as in all jazz, in Afro-Cuban jazz the beat is not played by any instrunments as such. It is felt, rather than actually heard. Afro-Cuban jazz is, in it’s performance, the marriage of Afro-Cuban rhythm and soloists.