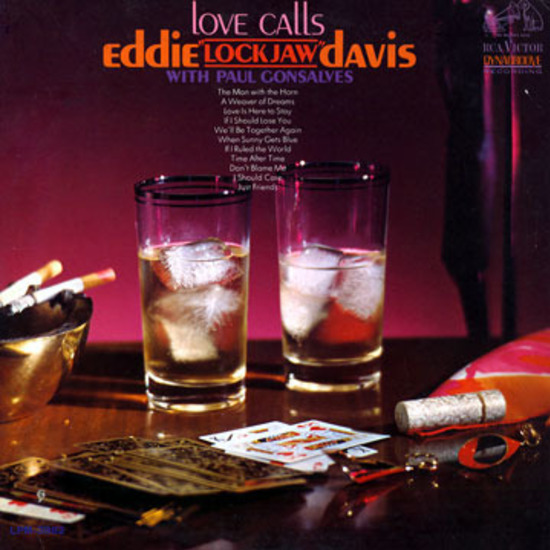 Think of “Lockjaw” Davis and ten to one you think of Count Basie. Think of Paul Gonsalves and – same thing, you think of Duke Ellington. The top tenors, in other words, of the top big bands; musicians from the top league where the competition is toughest. Yet there is no battle here, no contest, no vying to outdo the other in terms of velocity.

If you know these two men only by hearsay, you may have reservations about them as balladeers. They both have reputations for derring-do of a different kind. Davis has never hesitated to do battle with the most frenetic performers, with those who would stick at nothing to win, and lost – to him. And Gonsalves was the hero of one of the great nights in jazz history, when he blew twenty-seven romping, stomping choruses on Duke Ellington’s Dimuendo and Crescendo In Blue at Newport 1956.

It is easy for jazzmen to become typed, so that the public demands the repeated display of just one particular facet of his talent. This has happened to the two men showcased in this album, where the other side of their musical personalities is brought into focus. Although they have both developed highly individual styles, their original sources of inspiration were masters of the ballad – Ben Webster in Davis’ case, Coleman Hawkins in that of Gonsalves.

Their different approaches to the ballad make this recording consistently interesting and surprising. Both are soulful, both are rhapsodical. But Davis plays with clear, confident articulation, a buzz in his tone, and a bite in his phraseology. Generally he is the more driving and passionate of the two. The Gonsalves style is, on the other hand, sinuous, insinuating and less direct. His imaginative lyricism is more tender and often melancholy, his tone well-produced and finely rounded.

The breathy sub-tone, which Gonsalves uses so well, adds a curiously confidential and intimate dimension. It is like the musical equivalent of a whispered aside or a delicate suggestion. But both men alternate very adroitly between the discreet and the bold. Their mutual understanding is, in fact, positively uncanny at times, for they had never previously recorded together, and preparation before the sessions was minimal. In the studio their long term professionalism stood them in good stead, as did that of their accompanists, whose taste and sensitivity contribute so much to the recording’s appeal. Never obtrusive, they remain in close, listening support, Hanna and Barksdale being quick to prolong or emphasize the thoughts of the two soloists.