A Meal You Can Shake Hands With In The Dark 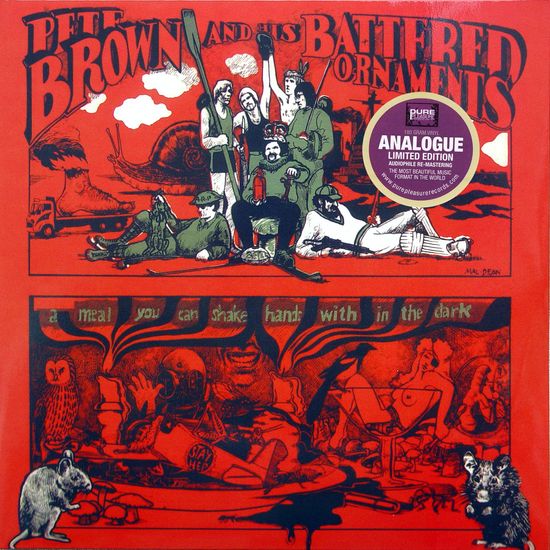 Pete Brown and his Battered Ornaments

A Meal You Can Shake Hands With In The Dark

Pete Brown was a Londoner and a veteran of the underground scene. Born in 1940, he first came to prominence as a poet. He was just 14 when his first poem appeared in ‘Evergreen Revue’ in the US. Then in the early sixties he worked alongside another British poet Mike Horowitz. His direct involvement with rock music came when he was asked to form a songwriting partnership with Jack Bruce to write lyrics for Cream and the partnership proceeded to produce the lyrics for many of their finest songs:- Wrapping Paper, I Feel Free, Sunshine Of Your Love and White Room. After the demise of Cream, Brown continued to write with Bruce but also began his own recording career with The Battered Ornaments who included Chris Spedding. After an initial 45, which with its wailing saxes and effective vocals was underrated, the band recorded this album which was a mixture of jazz-rock and blues. Dark Lady, The Old Manand Station Song were among the fine tracks and the latter later got a further airing on the Before Singing Lessons compilation. Station Song and Dark Lady had earlier featured along with Travelling Blues on the ultra-rare promo-only Harvest Sampler in 1969.

Brown then suffered the humiliation of being thrown out of the band the night before they had a Hyde Park gig with The Rolling Stones.Brown’s response was to form a new band, Piblokto!

This release breaks the long sides down to four sides of vinyl which enhances the sound quality considerably. Also of interest is that it has been mastered in the same studio at Abbey Road as was the initial release and from the same original analogue tape masters.