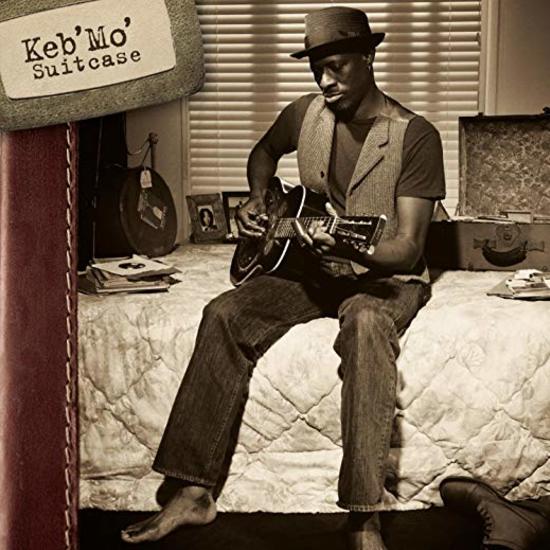 On Suitcase, his eighth studio release, Keb’ Mo’ (Kevin Moore) reunites with John Porter, the producer of Moore’s critically lauded first album, and the result is a pleasant, midtempo suite of songs dedicated to the emotional baggage everyone carries with them as they plow through increasingly complicated lives in search of peace, love, and some measure of personal redemption. Moore covers this ground with a wink and a grin in his voice, though, and Suitcase emerges as a wry commentary on modern life that still manages to sound bright and positive, beginning with the effervescent, sprung reggae rhythm of the opening track, “Your Love,” one of the best cuts here.

Other highlights include the lovely ballad, “Still There for Me,” a celebration of the little man and his private victories, “I’m a Hero,” and the soothing, hopeful shuffle that closes things out, “Life Is Beautiful.” Moore is generally classified as a blues player, but the truth is, aside from his first album, he has actually done very little true blues material, and it is probably more accurate to call what he does blues-informed, but even that ignores the point that he is probably much closer in tone, theme, and feel to James Taylor than he is to Robert Johnson or any other blues figure. He does turn to the blues here, though, on the title track, “Suitcase,” and morphs it into a wonderfully engaging song about what people bring into a romantic relationship and what they take away in the end, making full use of the “emotional baggage” connection inherent in the title. It is Keb’ Mo’ at his best, drawing on his ability to synthesize roots forms like the blues into completely contemporary commentaries on the struggles, travails, and blind faith in personal redemption that accompanies people as they slog their way daily ever deeper into the 21st century. Steve Leggett/AMG