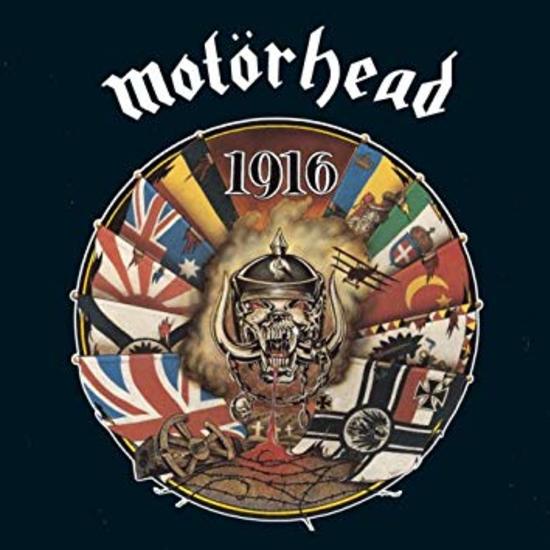 Rock’n’Roll! If ever there was one single album that summed up the Motorhead philosophy of ‘We are Motorhead, and we play Rock’N’Roll Music’, it was ‘1916’! The real ‘swansong’ of the dreamteam/dreamtime line up of Lemmy, Phil Campbell, Wurzel and Philthy Animal Taylor, ‘1916’ raised the bar for Motoralbums to follow with it’s ‘all killer, no filler’ approach, not a duff track to be had….‘The One To Sing The Blues’ was as potent a statement of intent for the rest of the album as you’re ever likely to get, pure Motorhead, a sonic kick in the guts and a heart punch in the lyrics.

After Lemmys’ emergency operation to remove his tongue from his cheek after penning the less-than-humble ‘I’m So Bad (Baby I Don’t Care)’, the Four Hoarse Men of the Apocalypse kicked into ‘No Voices In The Sky’ – affirming Lem’s earlier wake-up call from Iron Fists’ ‘Don’t Need Religion’ that this is it, there ain’t no afterlife, Evangelists are phonies and that yep, there ain’t no God, but if there is , he is living in Putney and screening his calls.

The spirit of Chuck Berry duckwalks into the studio alongside Wizzo and Wurzel for ‘Going To Brazil’, much like a night out with your favourite hedonist, all wrapped up in 12 Bars ‘Nightmare/The Dreamtime’ was a bit of a departure (off the Motorway, if you will) – a bit of an ‘Orgasmatron’ reprise meeting a Mandrax-induced bad dream, all backwards guitars and creepy effects – Psychotronic rather than Psychedelic! It segued nicely into ‘Love Me Forever’, much like the best f*** you ever had, with a gentle opening , teased lasciviously into some ferocious banging!

Is it a paean to the shallowness of Los Angeles, or a (quick call the medics! Lem’s got his tongue stuck in his cheek again!) loving piss-take of his adopted city? Either way, ‘Angel City’ is rip-roaringly full-on, and paves the way for ’Make My Day’ – another shot of Lemmy’s wordsmithery that won’t have the authors of ’50 Ways to leave Your Lover’ knocking at his door.

Was there a more perfect wedding than Motorhead writing a song about the Ramones? The worlds’ two greatest rock’n’roll bands, all in one song – sign me up, Scotty! A feature of Motorhead’s live set for years to come, a song by legends, about legends, for umm, us leg ends who listen to this stuff. Leg ends? I’m stumped!

‘‘1916’, the title track, not so much a departure as a ‘I Cant Believe It’s Motorhead’ moment on first listening…. It’s since become the stuff of legend, the atmospheric (really, it can still bring tears to my eyes, especially around November….) ‘song of the Somme’, where a righteously and rightfully solemn Lemmy delivers a reading of a young boy soldier’s brief life (and death) in the trenches of World War 1, over an atmospheric, sparse backing. Heart-rending. Really. It comes as no surprise to hear that this track is used in a War Grove Museum in France today. Let those who ignore History.

Having nursed a battered old copy of ‘1916’ since 1991, I salute Pure Pleasure Records for taking the trouble to make this album sound as killer as it always should have. For the first time ever (shame on you WTG records back in 1991!) this album has been expertly mastered (by sonic genius Ray Staff) from the original analogue tapes. To paraphrase Harold Macmillan, ‘You’ve Never Heard It So Good’! Pilly, Motorheadbanger # 2740, March 2009