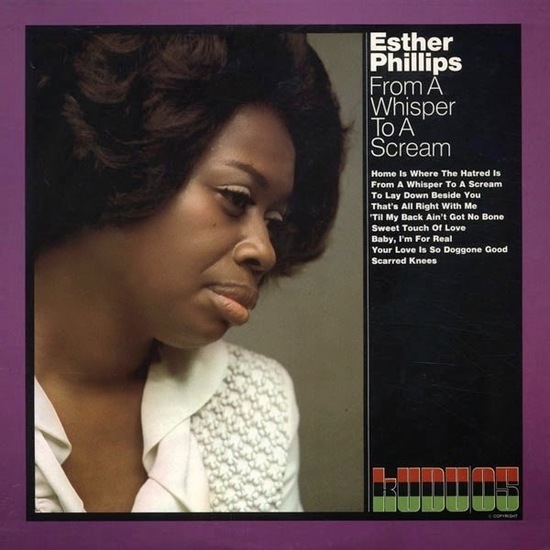 One of Esther Phillips finest ‘70s releases, From a Whisper to a Scream is the first of seven albums the singer recorded for CTI offshoot Kudu. Arranged and conducted by Pee Wee Ellis, the December 1971 session also involved principal players such as bassist Gordon Edwards, drummer Bernard Purdie, percussionist Airto, guitarists Cornell Dupree and Eric Gale, keyboardist Richard Tee, and saxophonists Hank Crawford and David Liebman.
Setting the tone for Phillips’ Kudu era, Whisper offers a series of spacious, yet fully arranged ballads of burning heartache, along with a handful of relatively funky numbers that do nothing to compromise her talent, dishing out loads of classy grit. It’s a definite point of departure from the likes of Esther Phillips Sings and And I Love Him, her field of contemporaries closer to Al Green and Aretha Franklin than before. She grabs onto “Home Is Where the Hatred Is,” Gil Scott-Heron’s most harrowing rumination on drug dependency — which, at that point, wasn’t even a year old — as if it were her very own, and it’s all the more poignant given its parallels with her own life. (It’s meaning was only compounded by her death in 1984.)

Though there is absolutely nothing lacking in the album’s more energetic moments, it’s still the ballads that shine brightest, like the alternately fragile and explosive “From a Whisper to a Scream” (Allen Toussaint) and a staggering “Baby, I’m for Real” (Marvin and Anna Gordy, made popular by the Originals) so vulnerable yet commanding that it really should’ve closed the album.