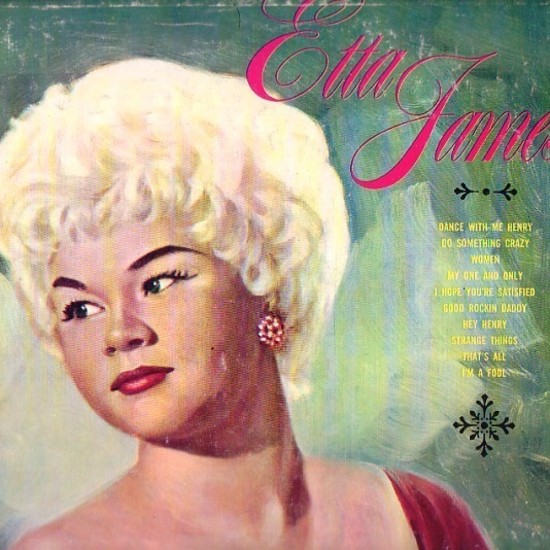 Etta James, one of the most fabulous and respected figures in the history of R&B music. Here are some of Miss Peaches’ legendary pre-Chess recordings including the first session, cut on Thanksgiving Eve 1954, when she was just 16, which yielded “Roll With Me, Henry”.

“Jean Mitchell and her sister Abbysinia came from New Orleans and were Creole-looking people,” wrote our subject in her autobiography. “ Jean was my age; Abbye was eight or nine years older. Jean and I started singing together. Soon Abbye joined in and, just like that, we became the Creolettes. We were project girls imitating the young rhythm and blues of the time. Mainly, though, we were intrigued with vocal harmony. We developed a tight three-way blend, imitating groups like the Spaniels, the Swallows, the Chords and the Spiders. One afternoon the Creolettes were singing at a record hop when who should show up but Hank Ballard and his superfine Midnighters. We were thrilled. When they heard us sing, they said something encouraging and, man, that’s all we needed to hear. When they sang Work With Me, Annie, the place went wild. Next day the song was still on my mind. Answer songs were big back then, and then it occurred to me – why not answer Hank’s hit? I liked doing spunky shit. So I wrote Roll With Me, Henry, a pushy little jiveass reply.”

That blockbuster initiation was produced by the fabled Johnny Otis, the hipster also responsible for renaming Ms H and her gal pals Etta James and the Peaches: “The Peaches were pissed because I was getting the glory, but I was even more pissed than the Peaches because Georgia Gibbs came out with her Suzy Creamcheese version. I was happy to have any success, but I was enraged to see Her Nibbs singing the song on the Ed Sullivan Show while I was singing it in some funky dive in Watts.” Providing the voice of “Henry” on Etta’s original was Richard Berry, who went on to sing on and write many other songs for her, some of which, like Good Rockin’ Daddy, also feature back-ups by those fabulous chicks, the Dreamers.
Not only has Etta James made some wonderful records in her illustrious career , she has also authored the brilliant autobiography Rage To Survive, from which all of the above quotations are borrowed. by Mick Patrick