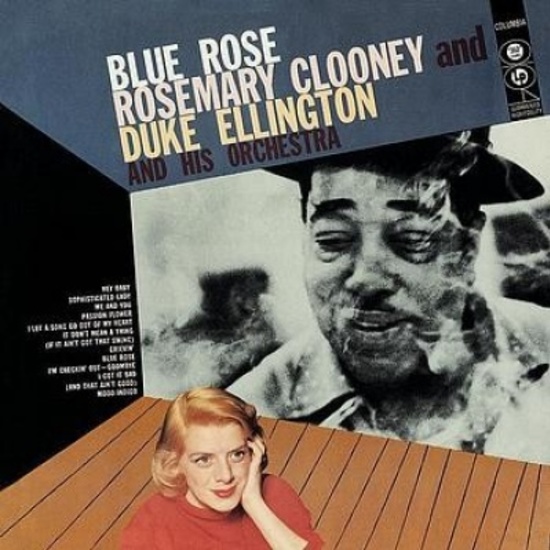 One of Rosemary Clooney’s best records, and one of Duke’s more accessible offerings, combined on one LP. The recorded output of the 1950’s didn’t get much more satisfying than this. Duke’s music was always very sophisticated and this time it’s even more obvious with a presence of such a talented singer as Rosemary Clooney. The songs are marvelous and she sounds young, fresh and sexy (ladylike sexy). In Blue Rose, not only are Clooney’s vocals outstanding, but the arrangements are some of the prettiest of jazz.

The band swings simply and sweetly, though still thoroughly in the Duke style. As if to make the point that the band is the “other” star of this recording, there’s one instrumental here – “Passion Flower” (Johnny Hodges on sax never sounded more sure of himself). Its inclusion in the program, without a vocal from Clooney, is at first bizarre – but seems to make sense within the context of the album.

The fascinating album notes explain why and how separate tracks for Rosemary Clooney and Duke Ellington’s orchestra had to be laid down. One would never realize that singer and orchestra were not together. They are totally in sync. This is not big, belting jazz; this is sophisticated, late night, intimate singing and playing. This is one of the most memorable pairings of a “popular” singer with a jazz giant; ranking with the first Sinatra-Basie album and the Coltrane-Hartman session.