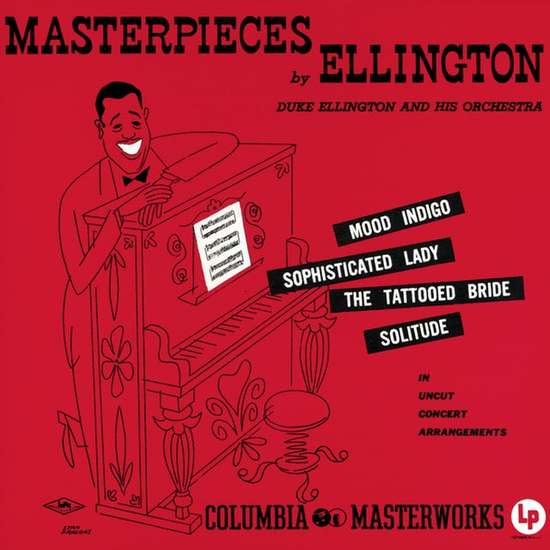 When Ellington went into the studio in 1950 to record the longer tracks on this LP, his orchestra was a bridge between its late-1940’s configuration (the 5-man trumpet section) and its mid-1950’s personnel. The sax section had settled into the form it would have for most of the ensuing two decades (old-timers Hodges and Carney and newcomers Procope, Hamilton and Gonsalves); the trombone section had long-timer Lawrence Brown as well as Tyree Glenn and newcomer Quentin Jackson; and the drummer was still Sonny Greer, who had anchored the rhythm section since the beginning. Greer would retire at the end of the year, Hodges would defect for two years, Brown and Glenn would leave; Louis Bellson and Cat Anderson would join up and Ellington would begin to re-form. Ellington’s orchestra from 1953 on would be a great, swinging and sensitive one, but it would not make the same lush sound that this one did.

The arrangements and orchestrations all bear the hallmarks of Ellington’s collaboration with Billy Strayhorn in the late 1940’s: they are lush, symphonic, impressionistic, and densely (and adventurously) harmonic. “Mood Indigo”, in particular, is a 15-minute tone-poem with shifting colors and key relationships as Ellington and Strayhorn bring the melody through a wide variety of guises, from Glenn’s wah-wah trombone solo to Shorty Baker’s lyrical waltz to orchestral and piano passages which do homage to the influence which Ravel and Stravinsky had on both of them. Great solos abound here and on the other tracks, most notably from Hodges, Brown, Hamilton, Gonsalves, Carney, trumpeters Baker and Ray Nance, and (most probably) Billy Strayhorn on piano, especially in “Mood Indigo”

“The Tattooed Bride” is the only new piece from the original “Masterpieces by Ellington” LP, and it is a beauty. The others of the original tracks — “Sophistocated Lady” and “Solitude” — are not laid out as inventively in their harmonics or structure. Of the group, “Solitude” is perhaps the weakest, but this is a relative term. Ellington would go on to pen many more extended, symphonic works, but none would have quite the multicolored, impressionistic tone-pallate that these do. And Strayhorn’s presence would not be as pronounced in those future works as it is here: the orchestration and harmonies in particular bear his mark. These are masterpieces indeed: great works of art by two of our greatest composers/orchestrators, and played by one of the greatest orchestras in Afro-American music. Andrew R. Weiss