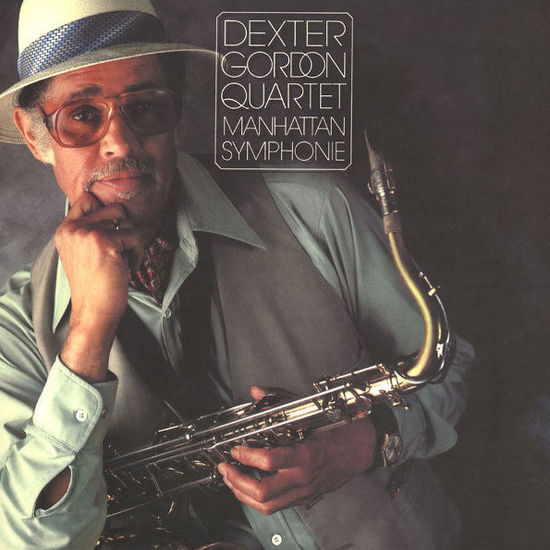 During the autumn of his illustrious career, Dexter Gordon (1923-1990) was on a winning streak. In 1976, the sophisticated giant of the tenor saxophone had returned to America after 14 successful years in Europe (with occasional visits to his native country); when he played a homecoming engagement at New York’s fabled Village Vanguard, the seats were filled each night with adoring fans and enraptured critics. Two years later, Gordon recorded Manhattan Symphonie, his third album for Columbia and the first with his exceptional working rhythm section of pianist George Cables, bassist Rufus Reid, and drummer Eddie Gladden.

From the opening notes of the classic ballad “As Time Goes By,” we are fully aware that we’re in the presence of a master. The tone is luminous; the placement of the notes, impeccable; the feeling profoundly affecting. More than almost any other improviser of his caliber, Gordon understands exactly why “the fundamental things apply”. The rest of the set combines bright new material, such as Gordon’s jauntily bopping blues “LTD” (which stands for “Long Tall Dexter”) and Cables’ samba “I Told You So” with updates of two post-bop staples: Donald Byrd’s “Tanya” (which Gordon had recorded for Blue Note in 1964) and John Coltrane’s propulsive “Moment’s Notice.” But the masterpiece herein – indeed one of Gordon’s all-time surpassing performances – is “Body and Soul,” in which Gordon, an early crucial influence on Coltrane’s approach to the tenor, returns the favour by taking a page out of Coltrane’s (and McCoy Tyner’s) harmonic book.

This expanded issue of Manhattan Symphonie includes two bonus tracks, also from 1978: Thelonius Monk’s lustrous “Ruby My Dear”, and a previously unreleased on vinyl rendition of “Secret Love”, a Dexter favourite. In addition to the acclaimed writer Pete Hamill’s wonderful original liner notes, there is a lovely reminiscence from pianist George Cables.