The Sound Of Jazz 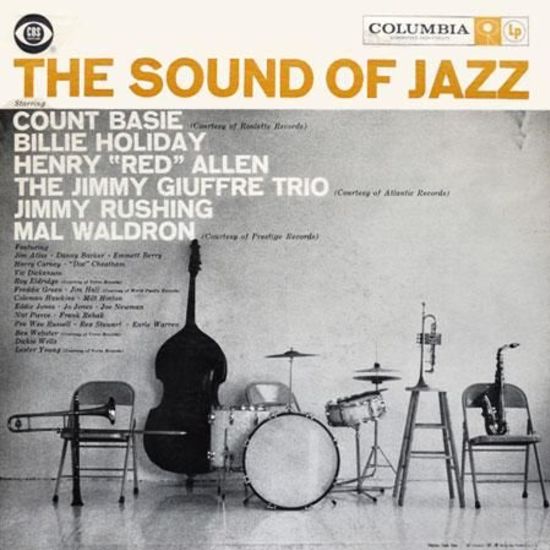 The Sound Of Jazz

“The Sound of Jazz” is a 1957 edition of the CBS television series Seven Lively Arts, and was one of the first major programmes featuring jazz to air on American network television.
The one-hour program aired on Sunday, December 8, 1957, at 5 p.m. Eastern Time, live from CBS Studio 58, the Town Theater at 851 Ninth Avenue in New York City. The show was hosted by New York Herald-Tribune media critic John Crosby, directed by Jack Smight, and produced by Robert Herridge. Jazz writers Nat Hentoff and Whitney Balliett were the primary music consultants.

The Sound of Jazz brought together 32 leading musicians from the swing era including Count Basie, Lester Young, Ben Webster, Billie Holiday, Jo Jones and Coleman Hawkins; the Chicago style players of the same era, like Henry “Red” Allen, Vic Dickenson, and Pee Wee Russell; and younger ‘modernist’ musicians such as Gerry Mulligan, Thelonious Monk, and Jimmy Giuffre. These players played separately with their compatriots (see the song list below), but also joined to combine various styles in one group, such as Red Allen’s group and the group backing Billie Holiday on “Fine and Mellow”.

The show’s performance of “Fine and Mellow” reunited Billie Holiday with her estranged long-time friend Lester Young for the final time. Jazz critic Nat Hentoff, who was involved in the show, recalled that during rehearsals, they kept to opposite sides of the room. Young was very weak, and Hentoff told him to skip the big band section of the show and that he could sit while performing in the group with Holiday.

During the performance of “Fine and Mellow”, Webster played the first solo. “Then”, Hentoff remembered:
Lester got up, and he played the purest blues I have ever heard, and [he and Holiday] were looking at each other, their eyes were sort of interlocked, and she was sort of nodding and half–smiling. It was as if they were both remembering what had been—whatever that was. And in the control room we were all crying. When the show was over, they went their separate ways.

Within two years, both Young and Holiday had died.