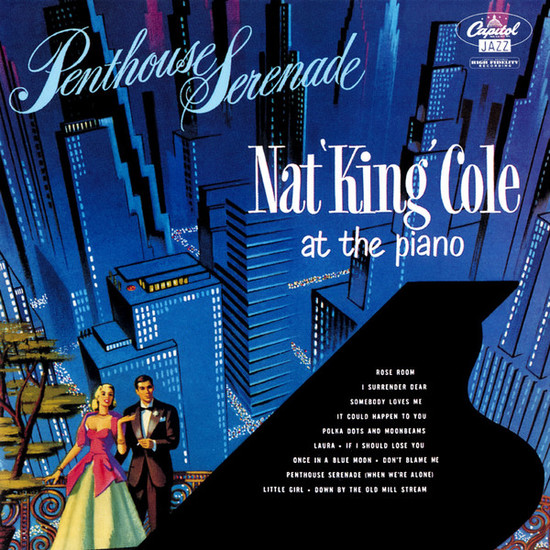 The year after he had formally disbanded his trio to turn his attention to vocal pop music, Nat “King” Cole reversed himself and went into the studio with guitarist John Collins, bassist Charlie Harris, and drummer Bunny Shawker and recorded the eight-song 10" LP Penthouse Serenade, a quiet, reflective set of standards like “Somebody Loves Me” and “Laura” that he performed instrumentally at the piano. The album confirmed that, whatever success he might be having as a singer, he hadn’t lost his touch. In 1955, with the 12" LP gaining dominance, Cole went back into the studio with Collins, Harris, and drummer Lee Young (Lester Young’s brother) and cut four more songs to create a 12-track reissue of Penthouse Serenade that was his first full-length LP release.

In 1998, Capitol Jazz again expanded the album, putting out a 19-track CD version by appending an alternate take of “I Surrender Dear” from the 1955 session and six tracks recorded with Collins and Harris (and, on most of them, percussionist Jack Costanzo) from January 1952, four of which were previously unreleased. The justification for these inclusions was that they featured the same personnel, and they are interesting in that they include alternate, non-orchestrated versions of Cole hits like “Too Young,” “Walkin’ My Baby Back Home,” and “Unforgettable.” But they are not in keeping with the rest of the album in that they are vocal tracks. Nevertheless, it’s hard to argue with an album that, over the years, has grown from 23 to 51 minutes in length.