Son Of A Preacher Man 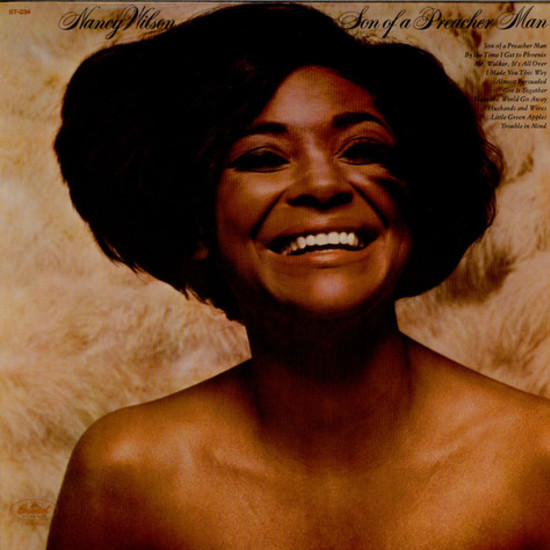 Son Of A Preacher Man

Nancy Wilson, one of the most stylish and sultry singers in jazz. Here we have an exciting mix of influences from the music of Nat King Cole, the romanticism of Billy Eckstine, the emotional delivery of Dinah Washington and the genius of Little Jimmy Scott.

Nancy Wilson signed with Capitol Records in 1959, and recorded 37 albums over a period of 20 years, a period in which many of her album sales were second only to the Beatles, surpassing even Sinatra, Peggy Lee, the Beach Boys and Nat King Cole.

Of Nancy Wilson, Bill Withers had this to say:

“What hit me was how totally original she was. Nancy resembles no one. Nancy cares about the song, she listens to what the song has to say, then presents it with loving care that it was written to convey”. Nancy Wilson this year was the recipient of the National Endowment for the Arts Jazz Masters Fellowships the highest honour the U.S.A. bestows upon it’s jazz musicians.

This exhilarating album features the legendary bassist Chuck Rainey on this previously hard to find gem of an album. Produced by David Cavanaugh and with musical arrangements from Jimmy Jones, Phil Wright and Joe Parnello. Of Jimmy Jones, Nancy Wilson says “one of the greatest arrangers there ever was. Very sparse, nothing overdone”.

As the album sleeve so aptly quotes “Nancy Wilson is one of the era’s exquisite purveyors of sound, singing ballads with emotional finesse”.