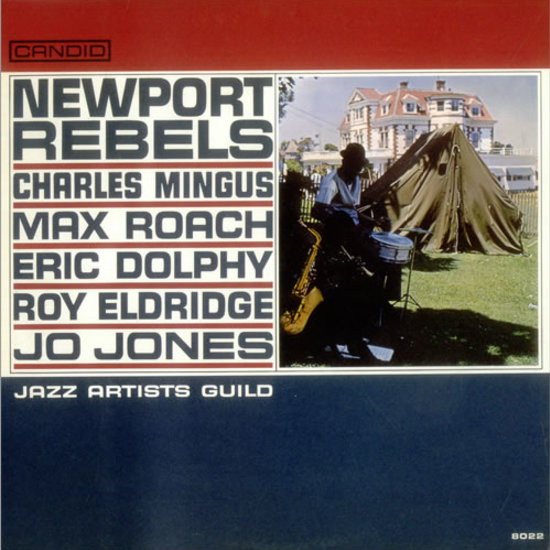 The one positive accomplishment of the 1960 Newport Festival was the creation in rebellion of a musicians’ festival at Cliff Walk Manor. As the “official” rites were ending because of ugly rioting in the streets several hundred people were listening in calm and pleasure to the rebels at Cliff Walk. The dissidents had been organized by Charles Mingus and Max Roach in protest against the accelerating commercialization of the annual Ben-Hur-with-a-horn production of Freebody Park. It was exhilarating for the musicians involved to realize that for once in their careers, they were capable of formulating and sustaining their own ground rules without booking agents, impressarios, and other middlemen.

The rebels set up their own tents for sleeping quarters, even stitching the canvas themselves; handled advertising and promotion; alternated as announcers of the rebels; and took tickets. (Mr. Mingus roamed the grounds besides, asking for payment from freeloaders outside the fence).

Particularly heartening was the fact that the protestants included musician of several age groups and many styles, oneof the few times in recent jazz history in which a spontaneous co-operative undertaking had united a broad range of jazzmen. “The big festival forgot about the music,” Jo Jones was explaining between sets at Cliff Walk one night. “But these little kiddies,” he pointed to several modernist on stand, “have to get a chance to be heard. That’s one reason we did this.” But the older men had also deserved longer and freer playing time than the “big festival” had provided, and one of the joys of the Cliff Walk concerts was the presence of Jones, Roy Eldridge, and Coleman Hawkins. Hawkins was one of the more determined rebels. Roy had at first decided not to join in. “My fighting days are over,” he sighed at one point. But the defiant spirits of the others finally bore him along too. I particularly remember Roy and Jo Jones playing an especially relaxed set with the sea and the beach as a backdrop. “Now this,” said Charlie Mingus with satisfaction, “is what Newport jazz was supposed to be”.

The quartet version of Wrap Your Troubles In Dreams has an incisive but relaxed Roy; and a nimble, soft-shoe-like solo by the former dancer Jo Jones. (“I’ll dance a chorus,” said arranger Jones.) The closing exchange between Roy and Mingus recalls the time many years before when Mingus was at Jefferson High School in Los Angeles and he and Roy had a non-musical conversation that was to influence Mingus strongly. Roy appeared as guest artist with backing by the high school band. “One of the kids in the band, a Negro, was putting down the older guys like Roy,” Mingus remembers. “He said they couldn’t play in tune, couldn’t play in a section, and that they weren’t trained at all. He was impressed by the white technicians. He’d written a little thing for Roy to play, and Roy preferred not to. . I told Roy something of what this guy had said about him, and Roy answered: “You see this horn. I play what I feel on it. That’s jazz. You’d better find out about the music of your people. Someday you’re going to thank me for talking to you like this.” Mingus has.

Also at Cliff Walk was Abbey Lincoln, who in the past year has broken completely free of her former image as a sultry supper club puppet and is now bitingly, boldly herself. Her pungent, proudly self-assertive Tain’t Nobody’s Bizness here is one of her freest performances on record (for more, listen to her album. STRAIGHT AHEAD, CANDID 9015). Note too, the stinging commentary of Eric Dolphy and Benny Bailey. (For a full set of the strikingly expressive Benny Bailey there is BIG BRASS, CANDID 9011.) Me And You was the last number of the Mingus-Eldridge session. Roy, seated at ease, was in a mood to play all night, but Jo Jones had a gig. “O.K.,” said Roy, “let’s just play the blues”.

The result is an extraordinarily full-bodied and fiery Eldridge performance. (“Yeah, baby!” exclaims Mingus at the end.) The Newport rebellion is over, but its crackling spirit was caught alive her.